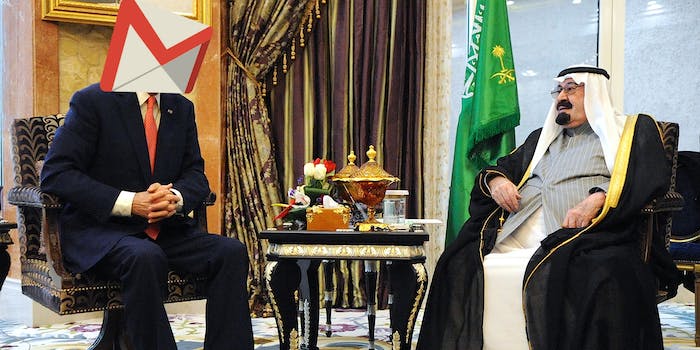 Web users in Saudi Arabia are now able to petition their king directly (“directly”) through a Web portal called Tawasol.

Web users in Saudi Arabia are now able to petition their king directly (“directly”) through a Web portal called Tawasol. The site was launched last Wednesday and will accept citizens’ complaints against government departments and applications for medical assistance.

“People will be able to inform the king about any shortcomings in the services offered by government agencies and to take suitable action for the benefit of all citizens,” says a statement on the website, according to Arab News.

King Abdullah is “keen to communicate with his people,” reports the Saudi Gazette.

Meanwhile, the General Authority for Audiovisual Media has also been launched to regulate YouTube channels of Saudi origin—traditional media in Saudi Arabia is already highly regulated, and young Saudis are increasingly consuming content on the Internet. According to the Associated Press, Saudi users watch more YouTube content per capita than any other country.

Riyaadh Najm, the president of the General Authority, said that the goal of the agency is not to censor Saudis but to make sure that they do not violate “widely accepted” norms in Saudi society—such as public criticism of the king.

“The goal is not to pressure them, but to elevate their quality and make sure the production is up to standard,” Najm told the AP. “At the same time, for them to be aware of the boundaries of society and to not exceed those boundaries.”

H/T BBC | Image via US Dept. of State/Flickr (PD) | Remix by Jason Reed