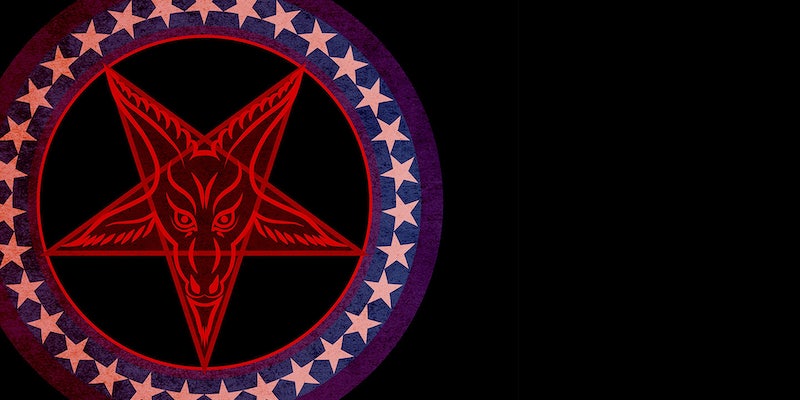 Politics, the Dark Lord, and Hobby Lobby: An interview with the Satanic Temple

Satanic political activism has gone viral, and you might be surprised how serious their agenda really is.

Over the past year, the Satanic Temple has quickly become one of the most controversial religions on the Internet.

The biggest stories involving the temple have always been responses to political events: Governor Rick Scott signed a bill in Florida that allowed school prayer, and the Satanic Temple, an “atheistic religion,” cheered him on for (unintentionally) allowing students to lead their classmates in prayers to The Dark Lord. The State of Oklahoma erected a monument to the Ten Commandments on the lawn of the Capitol building, so the Satanic Temple petitioned to erect a statue of Baphomet right next to it. Hobby Lobby won their Supreme Court case claiming that, as a Christian organization, they are exempt from providing employees with insurance that covers contraception, so the Satanic Temple announced that Satanic women should be exempt from certain anti-abortion laws based on the same legal arguments.

You could be forgiven for thinking that the whole thing is a parody or PR stunt. After all, that is how it has been widely reported and discussed online. Political blogs regularly lump the Satanic Temple together with Pastafarianism, the holiday Festivus, and other satirical movements and organizations that have been created as jokes to poke fun at religious extremists or their practices. Even the Church of Satan has repudiated the political activism of the Satanic Temple, and has accused them of misrepresenting Satanism in an attempt to get media attention.

“It is important to note that Satanism is not a cause, rather it is a set of principles that serve as a tool for each Satanist to get the most out of life. So ‘activism in the name of Satanism’ is meaningless. … The fundamental concepts of Satanism support the individual Satanist’s desire to be politically active towards goals that enhance his or her values.”

The Satanic Temple, on the other hand, is an overtly activist organization that uses media publicity to raise awareness about their own style of Satanism and the relationship between religion and politics more generally.

So in the wake of the latest online buzz about Satanic Temple, I decided to interview Lucien Greaves, the temple’s spokesperson, to clear up some of the misconceptions, and learn a bit about Satan, atheistic religion, and their political agenda.

Let’s get the obvious stuff out of the way first. Do you believe in demons? Eternally burning lakes of fire?

No. For Atheistic Satanists, Satan is a powerful symbol of a philosophical rejection of supernaturalism. The ultimate rebel against the ultimate authoritarian.

I’m sure you know there are people who have made up “mock religions” before. Pastafarianism, with the flying spaghetti monster, is a well-known example. Since you don’t believe in a literal Satan, there are many people who think of you as being in that same category. How do you respond to that?

I find it annoying when people claim that we aren’t a serious religion, and that we are “just” an atheist group trying to make a political point. Both are true: we are pushing for a separation of church and state, but it is based on deeply held religious beliefs.

Explain that a little more.

People are not clear about the idea of an atheistic religion: a symbolic structure, and a sense of purpose, that contains a religious narrative but that does not tie itself to superstition and the supernatural. Legally, you cannot have that bias. You cannot privilege “deeply held beliefs” that are attached to supernaturalism. It makes no sense to say that deeply held beliefs are only protected when they have a supernatural component.

You mentioned the separation of church and state. Does the Satanic Temple have an official position on the “Religious Freedom and Restoration Act,” the law that was used as the basis for the decision in the Hobby Lobby Supreme Court case?

I’m not an expert on RFRA. But I feel we have been very consistent with the separation of church and state. We agree that no religious monument should be on public ground. But if there is one, there needs to be more than one. If it’s already there, the only way to deal with that is to offer a counter balance.

You have gotten the most media buzz from your statue of Baphomet in Oklahoma, and your most recent campaign in response to the Hobby Lobby Supreme Court decision, where you offer women who are Satanists an exemption from certain anti-abortion laws on religious grounds. Does the Satanic Temple have other projects that haven’t gotten the same level of attention?

We offer a similar exemption to kids who might be subject to corporal punishment or solitary confinement. There are 19 states that allow schools to beat kids. We basically use the same arguments there: There is no scientific basis for the effectiveness of corporal punishment, so parents [who believe in Satanism] should be able to claim that their children are exempt on religious grounds.

Has that gone to court anywhere yet?

Also, I should point out that we have been working on the anti-abortion law exemptions for a long time. The Hobby Lobby case just gave us a great opportunity for publicity.

So what is next on the political agenda for the Satanic Temple?

We are going to try to get a holiday display in Florida next winter. We are working with the United Americans for the Separation of Church and State on that project. We are also interested in women’s health issues. The “informed consent” laws are just one of several types of “weasel bills.” We will be working on developing more exemptions. And our monument for the Oklahoma State House should be completed in September. We will have to see how that ends up playing out.

Listening to all of these political activities, I feel like there are probably lots of people out there who would agree with what you are doing, but who are just turned off by your use of the term “Satan.” Some people might ask, wouldn’t you be more effective as a secular organization, with a different name?

Sometimes it’s difficult to explain our motivation to someone who simply can’t embrace the term. But it’s important to think about the meaning. Using the name of Satan is powerful. It helps you to deconstruct the culture you’ve grown up in. Once you fully embrace outsider status, the symbol of the ultimate rebel, you begin to see more clearly the kind of hold that religion has on people. And that is an important message all by itself.

The Church of Satan and the Satanic Temple agree on many things. Both reject the idea of mysticism and the supernatural. Both believe in the absolute importance of the separation of church and state. They disagree on methods: the Church of Satan sees the erection of “Satanic monuments” as counter-productive to the goal of keeping church and state separate, while the Satanic Temple sees it as a method of raising awareness to further that same ultimate goal. But to an outsider looking in, their similarities seem to outweigh their differences.

This shouldn’t be surprising. In a way, it is a lot like Protestants and Catholics: two different interpretations of the same underlying beliefs. They have heated arguments and profound disagreements. Interestingly, the Church of Satan does not even consider the Satanic Temple to be “real Satanists,” just as many Protestants do not consider Catholics to be “real Christians,” and vice versa.

But whatever you think of the message or activism of the Satanic Temple, do not believe the online snark that has become all too common on political blogs that report on this issue: Satanism is a real religion, and all of the actions of the Satanic Temple are based on true, deeply-held beliefs. That is, in fact, the entire point.

Read Greg Stevens’s in-depth interview with Magnus Peter H. Gilmore of the Church of Satan its entirety on his personal blog.