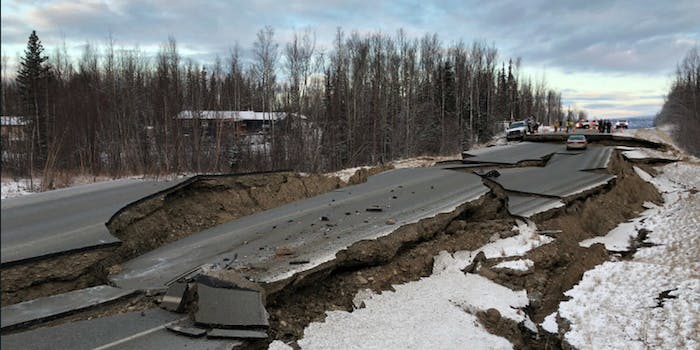 Thousands have been left without power.

A massive, 7.0 magnitude earthquake in Alaska caused widespread infrastructure damage and left thousands without either power or water on Friday.

The earthquake was centered about seven miles north of Anchorage, the state’s largest city, which is home to 300,000 people. It was followed by several powerful aftershocks. So far there are no reported serious injuries.

The shock initially prompted a tsunami warning for the Cook Inlet and southern Kenai Peninsula, which has since been cancelled.

“There is major infrastructure damage across Anchorage. Many homes and buildings are damaged,” Anchorage police department said in a statement. “Many roads and bridges are closed. Stay off the roads if you don’t need to drive. Seek a safe shelter. Check on your surroundings and loved ones.”

Officials at the Federal Emergency Management Agency (FEMA) encouraged citizens to reach out to family via text and social media to make sure they were safe.

Among those who posted they were OK was former Governor Sarah Palin, who tweeted about damage caused to her home.

🙏🏼 for Alaska. Our family is intact – house is not… I imagine that’s the case for many, many others. So thankful to be safe; praying for our state following the earthquake.

Other Twitter users have been posting videos and images of the impact that the quake had.

About a mile from my house on Vine rd between KGB and Parks. #Alaskaearthquake #earthquake #alaska pic.twitter.com/5HnpXKGZUw

There was just a MONSTER earthquake in Anchorage. I was getting coffee in a store at the time. Here's the shelves. pic.twitter.com/SqERuX7FRH

President Donald Trump, in Argentina for the G-20 summit, has also tweeted his support, telling Alaskans that they’d been hit by a “big one” but that the government would “spare no expense” in fixing the damage.

To the Great people of Alaska. You have been hit hard by a “big one.” Please follow the directions of the highly trained professionals who are there to help you. Your Federal Government will spare no expense. God Bless you ALL!

Southern Alaska has a high risk of earthquakes, due to the movement of tectonic plates under the region. Earthquakes of magnitude 7.0 and greater have been recorded there in recent decades, but it is rare for such a quake to happen near such a populated area.