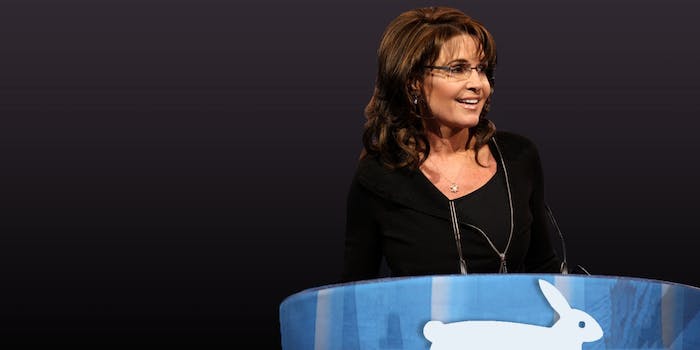 Sarah Palin, it would seem, has learned a lesson in the financial pressure the media faces.

Maybe people are paying less and less for their news to come from, as Sarah Palin puts it, the “lamestream” media. But people apparently don’t want to pay anything to hear Palin spew her own opinions.

Palin announced Monday that her subscription service on SarahPalinChannel.com, which costs $99.95 annually or $9.95 per month, would make all of its content free. This less than a year after the pay service began.

While it might seem that the decision to forgo charging Palin’s fans ultimately ended up a disaster—businesses that are doing well financially don’t typically stop making its customers pay out of the kindness of their hearts—that’s not how the former vice presidential candidate sees it.

Let her talk to you for a minute.

Effective August 1st, the Governor will be making all of her content free on her Facebook page and at SarahPac.com.

• If you are a monthly subscriber here on SarahPalinChannel.com, you will not be charged anything after this month. There’s nothing that you need to do.

• If you are an annual subscriber, you can have the balance of your subscription refunded to your credit card or you can roll your subscription into one of the other channels on our network. If you choose this option, you’ll get an EXTRA month absolutely FREE. Our networks include:
– New Life TV – Recharge your relationships and grow closer to God
– Alive with Joan Lunden – A vibrant community for women’s wellness and breast cancer patients and survivors
– K-Love TV – Christian Rock, Inspiration, and Family Values

It hasn’t been the friendliest of years for Palin. First, she was dumped by Fox News. Second, her daughter, Bristol, made big news last month by announcing a second out-of-wedlock pregnancy.

Now, her subscription service—which originally was launched, in Palin’s words, to build “a community where we’ll be able to share ideas and discuss the issues of the day and … find solutions”—has gone kaput.

Last November, former CNN president Jonathan Klein, whose niche digital company backed Palin’s channel, wouldn’t tell the Daily Beast how many subscribers the website had (though Quantcast recorded the number of September visitors at a tiny 36,000), but he did seem positive.

“It’s going really well,” Klein said. “She asked us from the very beginning never to talk about specific numbers, because for her she says it’s not about the numbers. It’s about the message and enabling her followers to all get together and talk freely. So I can’t give you numbers. I can tell you that she’s hit all our milestones and that she’s posting content constantly.”

What’s crazy is that Palin has 1.15 million followers on Twitter and that 4.4 million people Like her on Facebook. So, people will tune in if Palin is speaking or writing for free (either that, or she has a tremendous amount of hate-followers), but when they have to open their wallets, they’re not as interested.

But as the old saying goes: If you, just like the mainstream lamestream media, can’t beat ’em in charging for your content, join ’em.