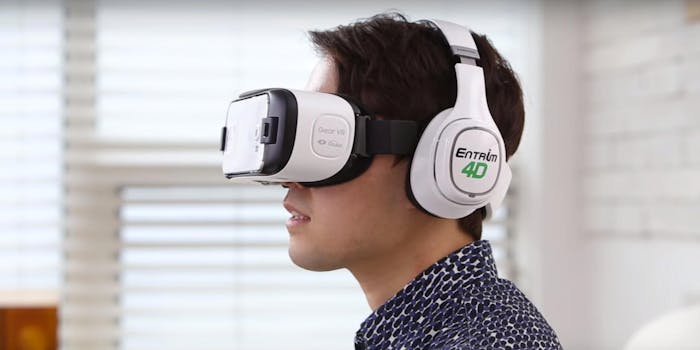 Better than a high-tech barf bag.

2016 is shaping up to be the year of virtual reality, and Samsung wants to make sure the jump goes as smoothly as possible. To help users adapt to the new technology, the company has developed headphones that give the wearer a more natural sensation of movement.

The Entrim 4D Headphones, a creation of Samsung’s experimental C-Lab, add an element to the Samsung Gear VR that was previously missing. While Gear VR offers audio and visual experiences, the Entrim headphones add a motion element that would otherwise require a separate, cumbersome motion-tracking system.

Samsung uses a novel method to create this effect: it tricks the body by delivering electric impulses to a nerve in the ear. The method has been dubbed Galvanic Vestibular Stimulation (GVS), and it’s about as scientifically involved as it sounds.

Essentially, the headphones contain electrodes that send impulses corresponding to the movement experienced in VR. The wearer gets the feeling that they’re engrossed in the on-screen action—including the ability to sense direction and speed of motion.

Doctors use this technology to restore balance to patients who have suffered a stroke, but in virtual reality, it solves a less pressing issue: motion sickness.

Virtual reality can be a very disorienting experience. Some studies suggest that more than 80 percent of people suffer from VR-related motion sickness.

VR hardware makers have tried solving this problem in many ways, from hardware improvements to seemingly silly but effective solutions like installing a digital nose on the display. Valve claims that its Vive headset, created in partnership with HTC, has solved the motion-sickness problem, though it remains to be seen if that’s true.

Samsung’s solution is noninvasive and appears effective, but it’s also a work in progress. The company has not announced when it’ll be released or how much it will cost.