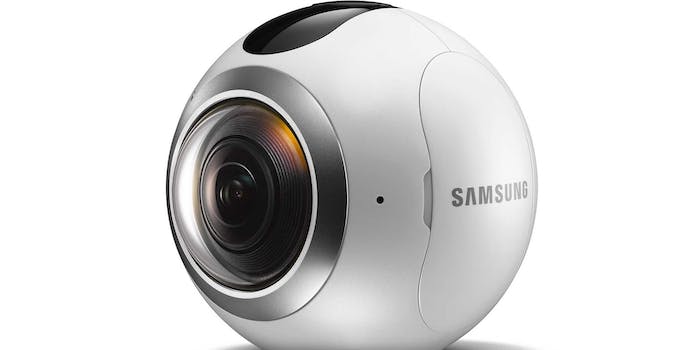 Samsung announced a new camera for its flagship smartphones, the Galaxy S7 and S7 Edge, on Sunday but the new handsets aren’t the only way for consumers to see the world through a Samsung lens; the company is also releasing a 360-degree camera.

The funky new camera, dubbed the Gear 360, made its debut on stage at Mobile World Congress in Barcelona, Spain. The handheld camera is mostly round, save for a flat portion on the bottom of the camera so it can be set on flat surfaces, and the white body gives it an eerie resemblance to an eyeball.

Inside the body of the camera is a dual-lens system—each 30-megapixel lens sports an aperture of f2.0 and is capable of capturing 195-degrees with wide-angle views. The overlapping part of the image is used to stitch together the end result: a full, 360-degree view of the world.

Like most 360 degree cameras, the processing of the images requires a connected device. In the case of the Gear 360, that means the Galaxy S7 or S7 Edge. According to Samsung, the camera will be compatible with select phones in its lineup, but no indication has been provided as to what additional phones will be included. A PC app will also be made available to handle the algorithmic image stitching.

Of course, the Gear 360 isn’t just for snapping photos—it can also capture 360 degree video. Recorded at 3840 x 1920, the video presents an opportunity for VR footage—something Samsung surely believes would be best watched through the Gear VR headset. YouTube and Facebook already support the content, which can be explored by clicking and dragging in a browser.

The Gear 360 supports microSD cards, allowing for storage up to 128GB. The battery is removable and will last up to 140 hours. The body of the camera is water and dust resistant, which should be enough to fight off some of the elements but not so much that you’d want to toss it in the pool.

No price point or availability was provided for the Gear 360, though the company said it will be available in select countries starting in the second quarter of 2016.

H/T The Verge | Photo via Samsung