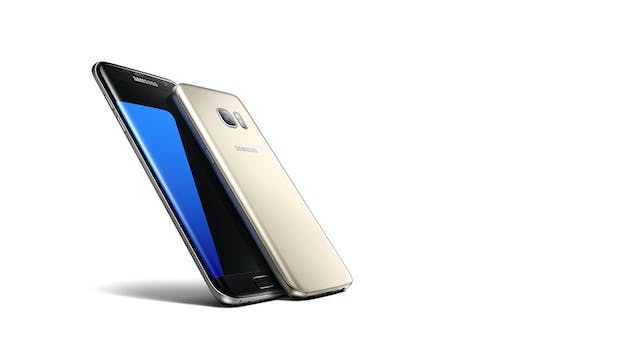 At Mobile World Congress in Barcelona, Spain, Samsung unveiled its latest flagship phones, the Galaxy S7 and the S7 Edge.

Looking at the devices head on, one isn’t likely to notice much of a difference between the latest models and their predecessors. The only visual indication of change between the S6 line and the new S7 is a larger screen on the S7 Edge, which now sports a 5.5-inch display as opposed to 5.1 inches. A 2560-by-1440 pixel display occupies that space.

On the back of the handsets, there is one noticeable difference: the absence of the camera bump. The lens no longer interrupts the rest of the casing, and Samsung managed to avoid adding any bulk to the body of the phones to make up for the design change.

Now in-line with the rest of the device, the rear-facing camera offers a “Dual Pixel” 12-megapixel lens—a first on a smartphone, according to Samsung. The Dual Pixel technology promises faster autofocusing, wider aperture, and 30 percent larger pixels than the iPhone 6S can produce, which means better low-light photos. On the front of the device, a much more plain 5-megapixel camera will tackle selfie duties.

The casing of the S7 series handsets is water and dust resistant, capable of being submerged for 30 minutes in up to about five feet of water. Water resistance was absent on the Galaxy S6 after being introduced for the Galaxy S5.

Also back from the S5 after being absent on the S6 is an SD card slot. A standard for many Android devices, Samsung pulled the expanded memory slot on the last iteration of the Galaxy S series, but it makes its triumphant return in the Galaxy S7 and S7 Edge.

Inside the handsets, the biggest change is a jump to 4GB of RAM from 3GB in the S6 series. Both devices count on Qualcomm’s Snapdragon 820, the latest processor from the manufacturer. This marks the return to American semiconductor company after Samsung opted to use its in-house chipset on the S6, though international models of the S7 series will continue to use Samsung’s own octa-core Exynos 8890.

Running Android 6.0, the S7 series devices feature upgraded software from Samsung’s TouchWiz suite. The biggest addition is the “Always On” mode, a feature reminicient of the Moto X’s Active Notifications, that offers the time and notifications while the device is in standby. Samsung claims the feature will eat just half a percentage of battery per hour.

The Galaxy S7 and S7 Edge are kept running by 3000mAh and 3600mAh batteries, respectively. Wireless charging remains in the devices as a means of getting back up to 100 percent, though the batteries appear to not be removable.

Both the Galaxy S7 and S7 Edge will arrive for consumers in the United States and United Kingdom on March 11, 2016. For those who can’t wait, pre-orders can be placed starting February 23. Samsung is offering an incentive for those who claim their device early, as well—a free Galaxy Gear VR headset.