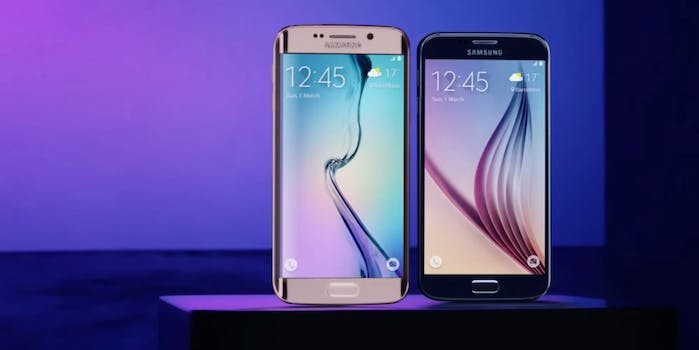 Samsung diehards might not be quite as ferocious as their Apple-loving nemeses, but you’d think they were a rabid lot based on their reaction to today’s big smartphone news. Samsung debuted its two new flagship devices at Mobile World Congress (MWC), a massive annual technology conference in Barcelona, Spain. The company’s loyalists were, well, not exactly pleased.

why did samsung change the removable batt/microSD option on the s6? it’s THE ONE THING the iphone doesn’t have that they like to brag about

By nearly all accounts, the Samsung Galaxy S6 and S6 Edge look like amazing smartphones. Samsung’s new flagship devices rethink the design of the core Galaxy line, eschewing Samsung’s oft-criticized telltale plastic form factors in favor of a metal-and-glass design that has early reviewers buzzing about it.

What they’re not buzzing about is the fact that Samsung eliminated two features that have set it apart from the iPhone for generations: a removable battery and a MicroSD slot for expandable storage.

It might not sound like a big deal, but for Android fans, it’s practically an ideological betrayal. Android, and the flagship hardware that runs it, have traditionally offered consumers far more choice than Apple’s relatively boxed-in, closed-off iOS software and iPhone hardware. Owners of older Samsung Galaxy smartphones could carry additional batteries to boost device longevity and never think twice about running out of internal storage, a common annoyance for any iPhone owner with more than a few locally stored photos, songs, or videos.

Additional batteries and swappable MicroSD cards were two inexpensive additions that made the Samsung Galaxy S5 and its predecessors feel friendlier to power users who would never think twice about defecting to Apple’s high-walled garden.

The Samsung Galaxy S6 edge doesn’t have a removable battery or a micro SD slot. I remember when Android owners bragged about those things

A very vocal group of Android fans isn’t pleased in the least—and they’re already shouting about it all over the Web. Forum threads with titles like “What’s more of a deal breaker for you, no removable battery or no SD card?” are already blowing up on go-to Android forums like Android Central. A Reddit thread about the controversy has over 700 replies.

The fact that the new Samsung #S6 does not have a removeable battery or microSD card means I will probably switch back to Iphone.

Wow @Samsung knows how to kill a product release. No micro-sd, no replaceable battery, no waterproofing on s6? No thx http://t.co/Zm5V7pVS8d

The S6 Edge boasts a twist with two symmetrical sloped edges where a special set of icons can be accessed, not unlike the Samsung Galaxy Note Edge before it. Both devices pack Samsung’s characteristically punchy QHD Super AMOLED displays, run Android Lollipop, and go on sale worldwide on April 10.