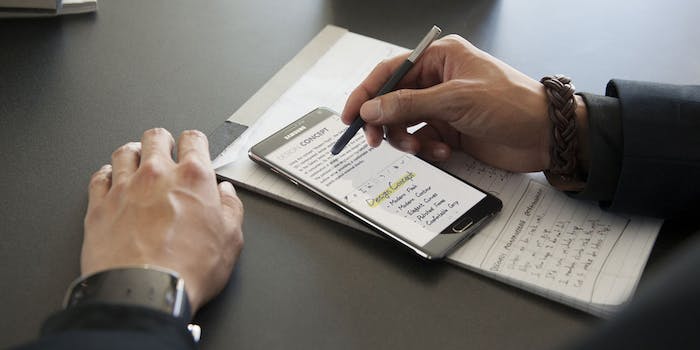 The Galaxy Note 4 and Note Edge will be available on all four major U.S. carriers this fall.

During an event at IFA 2014 in Berlin, Samsung showed off a slate of new products that will be available just in time for the holiday season. At its second Unpacked event of 2014, Samsung unveiled the Galaxy Note 4, a Galaxy Note Edge with a curved display, the previously unveiled Gear S, and a VR headset, the Gear VR.

The Galaxy Note 4 has a quad HD Super AMOLED 2560 x 1440 5.7-inch display, a faster processor and a 16-megapixel rear camera with optical image stabilization, which will help those of you with shaky hands. The Note 4 also has a 3.7MP front-facing camera that can take 120 degree “wide selfies” as Samsung calls it, presumably for those with wide faces?

More importantly, Samsung says the Note 4 can go from zero to 50 percent charge in about 30 minutes, much faster than the Note 3, which takes 55 minutes to reach the same charge levels.

Samsung also improved the S Pen, and will offer a case covered in Swarovski crystals, because why not. The Note 4 will be available on all four major U.S. carriers this fall.

The Galaxy Note Edge is a device that was shown off at CES 2013, which no one thought was ever going to be a real product Samsung would attempt to sell. Eighteen months later, and in a much more refined casing, the Galaxy Note Edge is Samsung’s latest attempt at a smartphone with a curved display.

With a slightly smaller quad HD+ display (5.6 inches versus 5.7), the Note Edge can match the Note 4 spec for spec. The only reason you should consider buying one is if you’re interested in having a ticker on the side of your phone, and if you’re right-handed. The curve of the screen is on the right side, so those of you who are left-handed won’t really enjoy using the Note Edge.

The curved part of the display isn’t an extension of the main display on the Note Edge, but operates on different software, and can provide additional information. It can show your most used apps, news, sports, and stock information from Yahoo, or even display an alarm clock so you don’t have to pick up your phone.

Just like the Note 4, the Note Edge will be available on all major American carriers this fall.

The Gear S can only be described as beautifully disappointing. The device looks great—and you can even give it the Swarovski treatment—but it’s much too large to be functional, unless you buy two and wear them as Wonder Woman bracelets for Halloween. When Samsung President DJ Lee came on stage during the Unpacked event, the Gear S was the first thing you noticed, and the screen wasn’t even on.

The Gear S is the most powerful smartwatch do date with 3G connectivity and a 1Ghz processor. That all seems great, but what kind of work are you planning to do on a smartwatch anyway? With a flurry of smartwatches expected to be announced over the next month, there’s no reason to buy the Gear S just yet—and you can’t, as no U.S. availability has been announced, but you can pick one up in South Korea in October. Unless you are a Shaq-sized human, in which case have at it.

In a surprise twist, Samsung unveiled the Gear VR Innovator Edition headset in partnership with Oculus. The headset, which will be available later this year, is powered by the Note 4 (and only the Note 4. No other devices, not even Samsung’s own will work with the Gear VR.). The Note 4 snaps into the Gear VR, as the headset utilizes the processing power of the smartphone.

Unlike the Oculus Rift, the Gear VR is completely wireless, making for a better experience. “The deep technical partnership with Samsung has enabled us to create a virtual reality headset with world class resolution and performance, all on a completely mobile platform,” said John Carmack, CTO of Oculus.

Samsung says the Gear VR Innovator Edition will be available later this year but did not elaborate on pricing.