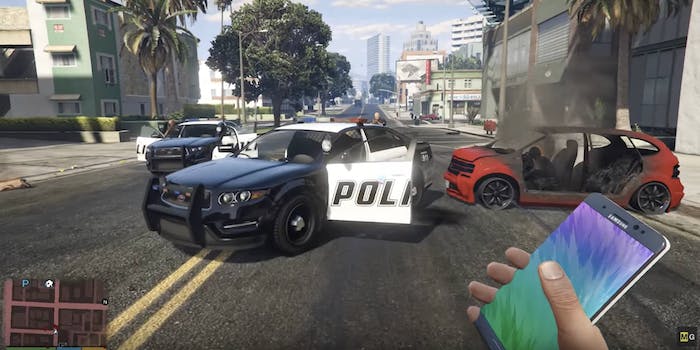 Samsung might know its Galaxy Note 7 devices are defective, but it doesn’t have a sense of humor about the global disaster.

After intrepid Grand Theft Auto V modders added the phone to the game as a bomb earlier this month, gamers flocked to YouTube to post footage of the device in gameplay. We’ve embedded one such example below, but fair warning, it might not last long: Samsung is reportedly using DMCA takedown claims to force YouTube to remove these videos, claiming copyright infringement.

As the Verge points out, this claim doesn’t exactly tick the boxes of a traditional DMCA takedown claim (the site calls it a “ridiculous overreach,” if we’re not mincing words), as it should fall under the fair use umbrella of parody. Indeed, at the time of this writing, the video that Techdirt originally claimed had been removed was still a live link, which could mean the video publisher successfully appealed the DMCA claim.

It’s just one more in a long line of PR fails Samsung has faced this past month, from injuring children to forcing the evacuation of an airplane to attempting to stop a victim from going to the press to refusing to pay for damages caused by the devices. This latest development will no doubt blow up in Samsung execs’ faces too—that is, if the phones don’t first.