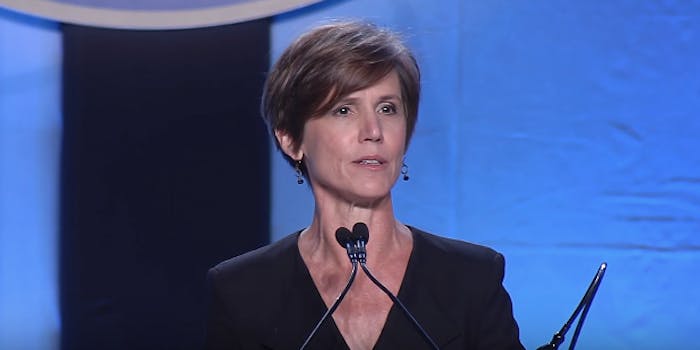 Former acting Attorney General Sally Yates warned that President Donald Trump’s attacks on the Justice Department were “tearing down” its legitimacy at a conference on Tuesday.

Yates, who was fired by Trump last year after she refused to uphold his order of a travel ban that targeted six Muslim-majority countries, made the comments at the 2018 Ideas Conference held by the Center for American Progress.

“It used to be a big news story that would say, ‘In an unprecedented step, Trump said this,’” Yates continued. “Now it doesn’t even make it through the full 24-hour news cycle because it happens so frequently.”

Regarding what she identified as apathy toward Trump’s criticism of the agency and the extreme nature of president’s vicious criticism to begin with, she lamented that “nobody’s rolling their eyes anymore.”

Trump, on Twitter and in rarely given interviews, has attacked special counsel Robert Mueller’s ongoing probe into Russian interference in the 2016 presidential election as a “witch hunt” and has blasted the FBI as corrupt. Last month, during a 30-minute phone interview with Fox & Friends, the president even threatened to seize the Justice Department in a bid to stop its current priorities in investigating collusion and interference allegations.

Democrats lawmakers, like Sen. Amy Klobuchar (D-Minn.) agreed with Yates remarks, and also condemned Trump’s “constant onslaught on the rule of law” before urging liberal voters to look toward the 2018 midterm elections.