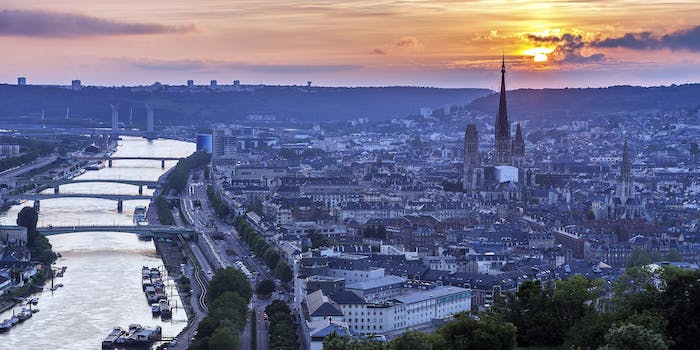 One other person is 'between life and death.'

A priest is dead and one other person is seriously wounded after two men took the church where he held Mass hostage Tuesday.

The hostage situation occurred at Saint-Étienne-du-Rouvray in Rouen, a northern French town in the Normandy region. Father Jacques Hamel, 84, and four others were in the church when the men stormed in.

Police soon arrived at the scene, where witnesses heard shots fired. The two men who took the church were killed by police. Hamel’s throat was slit, and one other person is “between life and death,” according to French Interior Ministry spokesman Pierre-Henry Brandet.

Motivations for the men taking over the church were unclear, but French Prime Minister Manuel Valls called the attack “barbaric” and vowed that “we will stand together.”

French President Francois Hollande and Interior Minister Bernard Cazeneuve both traveled to to Rouen, and Hollande told reporters that “two terrorists in the name of Daesh”—a different name for ISIS—carried out the attack. According to the AP, ISIS confirmed that it was behind the attack.

BREAKING: Islamic State says church attack in France was carried out by two `soldiers' from the group.

The Vatican condemned the attack and called it “horrific violence.”

“There is a new terrible news, which unfortunately adds to the violence that has occurred in recent days, creating immense pain and worry… We are particularly moved because this horrific violence took place in a church, a sacred place where the love of God is declared, with the barbaric killing of a priest and the involvement of the faithful,” the Vatican said in a statement.

Dominique Lebrun, the Archbishop of Rouen, spoke from Warsaw, Poland, and asked for prayers.

“The Catholic Church can not take other weapons of prayer and brotherhood among men,” he said, according to a French translation. “I leave here hundreds of young people who are the future of humanity, true. I ask them not to give in to the violence and become apostles of the civilization of love.”

The hostage situation at Saint-Étienne-du-Rouvray took place nearly two weeks after a truck plowed through Nice during a Bastille Day celebration, killing 84 people.