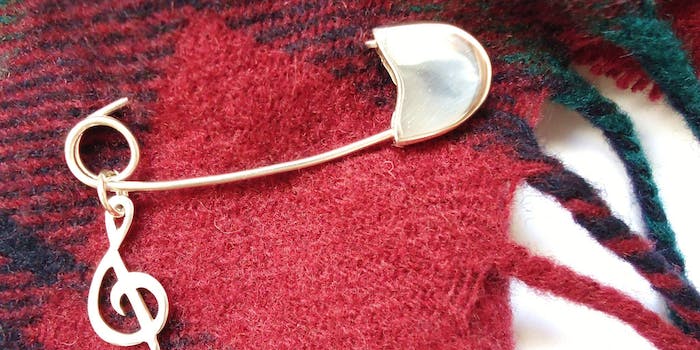 People in Britain are hoping this subtle sign of solidarity against racism makes a difference.

In the days since Britain voted to leave the European Union, reports of racist attacks have skyrocketed. So, in a show of solidarity against racism, people have turned to an unexpected symbol: the humble safety pin.

The idea started with Twitter user @cheeahs, who suggested the idea of wearing a safety pin as a sign of support for immigrants in the U.K.

Wear an empty #safetypin to show solidarity with EU citizens and immigrants in the UK. https://t.co/F58UqtzN7j

Day 1 of Initiative #safetypin – for EU nat'ls and for immigrants, this means I'm a safe person in an unsafe world. pic.twitter.com/WurV3QOIP8

#Safetypin was inspired by “I’ll ride with you,” an Australian campaign to support and protect Muslims from backlask in the wake of a terrorist attack. By wearing a safety pin, people are marking themselves out as allies in the fight against racism.

Wearing a #SafetyPin this morning. Solidarity with those who have made this wonderful country their home pic.twitter.com/6zx9EMTC29

I am a son of immigrant parents. I don't tolerate discrimination of any kind. We are stronger together. #SafetyPin pic.twitter.com/MU2irupHWV

While the #safetypin campaign’s heart is in the right place, it has already inspired a lot of criticism. It’s been described as “the visual symbol for ‘not all white people,’” and a reason for people to “take selfies and make it all about them.” And if well-meaning white Britons decide to just wear a safety pin and go no further, those criticisms are probably accurate.

After several days of fear and uncertainty in the U.K., #safetypin’s virality feels like the direct result of a nationwide desire to “do something.” It caught on like wildfire, and people have already reported instances of it having an impact in real life. But for #safetypin to really make a difference, wearers must take its meaning to heart. That’s why, alongside the viral hashtag, two instruction manuals have become very popular over the past few days: A 2015 Guardian article about responding to racist attacks, and a guide to intervening against public harassment, from the organization United Against Racism.