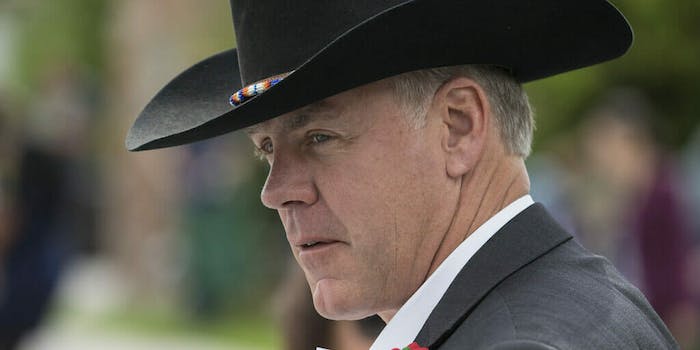 U.S. Department of the Interior/Flickr (CC-BY-SA)

Secretary Ryan Zinke is out at the Department of the Interior

Zinke has faced multiple scandals during his tenure.

“Secretary of the Interior @RyanZinke will be leaving the Administration at the end of the year after having served for a period of almost two years. Ryan has accomplished much during his tenure and I want to thank him for his service to our Nation…….” Trump wrote.

Secretary of the Interior @RyanZinke will be leaving the Administration at the end of the year after having served for a period of almost two years. Ryan has accomplished much during his tenure and I want to thank him for his service to our Nation…….

Zinke is just the latest member of Trump’s Cabinet to get the boot, after the high-profile departures of Attorney General Jeff Sessions and Chief of Staff John Kelly this fall. It is not yet clear if the departure was voluntary or if he was fired.

Zinke leaves in the midst of multiple scandals.

He has been under scrutiny since the beginning of his tenure, starting in March 2017. Zinke has been dogged by questions about his unusual spending, including getting a ride home in an oil and gas executive’s private plane, which cost taxpayers over $12,000. He also made special secretarial coins to hand out to guests, asked for a special flag to be flown at Interior headquarters when he was there, and replaced his balcony door at an exorbitant cost to taxpayers.

Zinke has also called a lawmaker a drunk, greeted a Hawaiian-Japanese lawmaker with a racially insensitive comment during a discussion about Japanese internment camps, awarded a company with ties to his hometown a $300 million contract for recovery efforts in Puerto Rico, had his security detail accompany him on a private vacation to Turkey, had his wife travel in government vehicles, and halted an American Indian casino project after lobbying from competitors, among other scandals. He is the subject of numerous investigations by the Office of the Inspector General, although it’s not clear whether those investigations will continue after he leaves office, according to the Washington Post.

Zinke also pushed for offshore drilling, briefly allowed the import of elephant trophies into the U.S., reduced protections for species on the brink of endangerment, and greatly reduced national monuments in Utah.

Deputy Interior Secretary David Bernhardt is expected to take over after Zinke’s departure, but a permanent replacement has not yet been named.

The Daily Dot reached out to the Interior Department for comment but did not receive a response by press time.