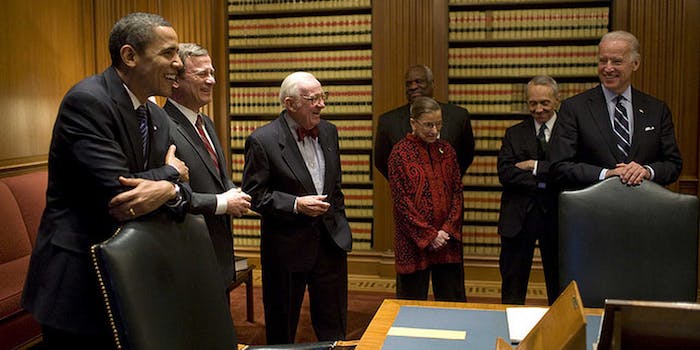 Notorious RBG is the best Supreme Court-themed Tumblr ever

Supreme Court Justice Ruth Bader Ginsburg is straight-up gangster, and now there’s a single-serving Tumblr that aims to constantly remind you of that fact.

Notorious R.B.G., which combines the Justice’s initials with rapper Notorious B.I.G.’s name (RIP, Biggie), was launched on June 25, the same day that the Supreme Court struck down a key part of the Voting Rights Act of 1965. The provision required certain states and local governments with history of racial discrimination to “pre-clear any changes to their voting laws with the Justice Department or a federal court.”

“Throwing out preclearance when it has worked and is continuing to work to stop discriminatory changes is like throwing away your umbrella in a rainstorm because you are not getting wet,” she wrote.

Coincidentally, that quote was also the first entry in Notorious R.B.G. Tumblr.

Since then, the blog has been uploaded with other quotes—from other dissenting opinions, radio interviews, etc.—image macros, and even GIFs that idolize the second woman to be named to the Supreme Court.

There’s even a Notorious R.B.G. shirt that you can buy for $15. The site has sold 967 shirts to date, an impressive feat for a blog that’s just a week old.