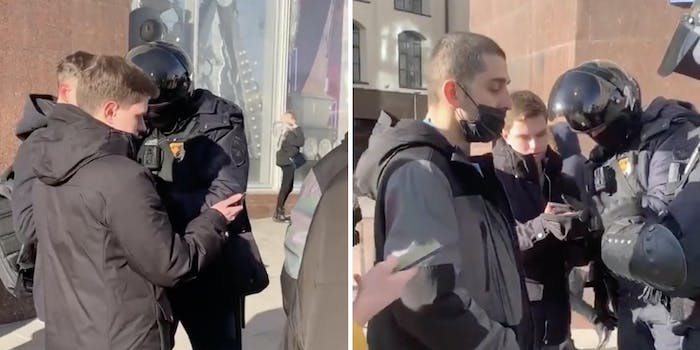 An apparent crackdown is taking place.

A viral TikTok video that reportedly shows Russian police searching through the phones of citizens in Moscow is causing widespread concern online.

The video, which has been viewed more than 2.4 million times since being posted on Sunday, appears to show two young men being confronted by police in the Russian capital city.

More than 5,000 comments were left on the post, where users argued over the severity of the situation.

Countless users compared the incident to something someone would expect to see out of North Korea, while others argued that not enough context existed to provide a proper analysis.

“This is North Korea right?” one user wrote.

“No context,” another added. “It could be for many reasons.”

The video went viral on Reddit as well where it received more than 2,700 upvotes in the popular r/PublicFreakout subreddit.

Unsurprisingly, the video was also widely shared across Facebook, Twitter, and other major social media platforms as well.

But is the video legit? The video was first shared to Telegram on Sunday by reporter Anya Vasileva, who claims that the encounter took place outside of a popular Russian toy store in Moscow’s Lubyanka Square.

In a statement translated into English, Vasileva stated that police were stopping pedestrians and demanding to see their messages and photos. Those who refused would not be permitted to pass.

Vasileva added that she approached the police and demanded to know why they were searching phones. After checking her press credentials, the police reportedly declined to answer.

Although Vasileva argued that such actions are illegal, Russian authorities, according to Business Insider, do not need a warrant to access a citizen’s digital devices.

The apparent crackdown comes shortly after Russian President Vladimir Putin signed a new law that could send anyone accused of sharing “false information” regarding the war in Ukraine to prison for up to 15 years. Despite the growing attacks against internal protest, Russians continue to take to the streets in opposition to the war.