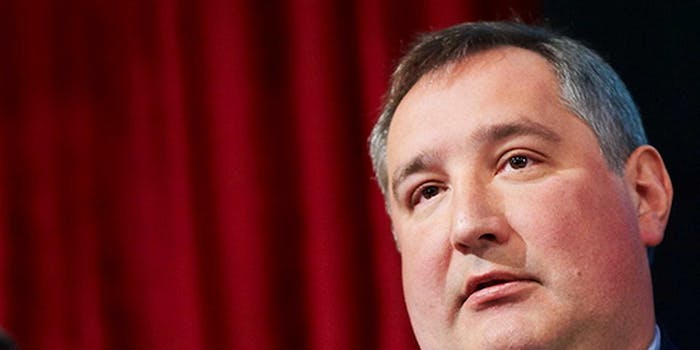 Putin’s inner circle is viciously mocking the U.S. on Twitter

Whatever's happening on the ground, we’re getting owned online.

Perhaps more startling than Russia’s occupation of Crimea is just how brazenly they’ve gone about it.

In the wake of an illegal referendum there that produced some highly suspect results, the White House put seven Russian officials on a blacklist, barring them from traveling into the country and freezing any dollar-denominated assets.

But President Vladimir Putin’s inner circle laughed the sanctions off and have continued to ridicule the world’s would-be peacekeepers in every possible forum.

Not long after TV presenter Dmitry Kiselyov of the government-controlled news agency Rossiya Segodnya remarked that “Russia is the only country in the world realistically capable of turning the United States into radioactive ash,” Vladislav Surkov, a top Putin aide, told reporters that the “only things that interest me in the U.S. are Tupac Shakur, Allen Ginsberg, and Jackson Pollock. I don’t need a visa to access their work. I lose nothing.”

Surkov also described his inclusion on the U.S. blacklist as a rare honor. “I think it’s kind of a political Osсar award from U.S. for Best Performance by an Actor in a Leading Role,” he said.

Meanwhile, Russian Deputy Prime Minister Dmitry Rogozin, who is thought to control the propaganda coming out of Rossiya Segodnya, has been trolling President Obama and other Western leaders on Twitter, characterizing the sanctions as an act of impotence.

Comrade @BarackObama, what should do those who have neither accounts nor property abroad? Or U didn’t think about it?)http://t.co/16KUTJPXOl

Canadian PM Stephen Harper put me on the list http://t.co/RfRrDg8gLB… Looks like they’re also looking for my accounts and villas)) They wish

Today’s the most important day in my life.The day of national selfconsciousness revival. I’m proud of my nation,my Motherland & my President

Crimea’s new Putin-approved prime minister, Sergey Aksyonov—who had been head of a small pro-Russia party that couldn’t muster 4 percent of the regional vote but now commands a paramilitary group armed with AK-47s—also got in on the Obama-taunting.

Obama, for his part, has been remarkably stoic here, refusing to let himself be drawn into a potentially devastating flamewar. But with all due respect, Mr. President, we know you’re capable of delivering sick burns. Tell whoever runs your social media accounts that it’s time to fight Photoshop with Photoshop.