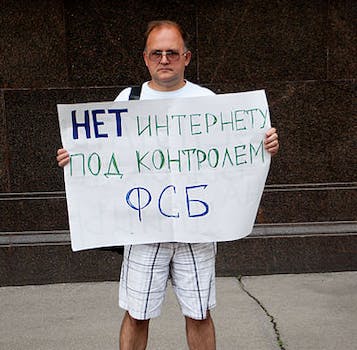 It began by blocking the entirety of LiveJournal, the country’s largest blogging community, to the city of Yaroslavl and part of surrounding Moscow from July 18 to 20.

Bill 89417-6 does exactly what Americans feared the Stop Online Piracy Act (SOPA) might do—it gives lawmakers the power to censor the Internet, whether that is their intention or not.

On July 18, local law enforcement informed a Yaroslavl court about pat-index, a neo-Nazi blog it had found on LiveJournal during a sweep. The blog’s hateful message violates Russian federal laws against extremism. Because of Bill 89417-6, the court now has the power to stamp it out completely and immediately.

The court ordered Internet provider Netis Telekom to block, among other illegal sites, this blog’s IP. The court order shows the IP to be blocked as 208.93.0.128.

However, LiveJournal blogs don’t have unique IP addresses. That IP belongs to all of LiveJournal Russia, effectively blacking out LiveJournal for everyone in Yaroslavl (a city of nearly 600,000) and all the surrounding areas to which Netis Telekom provides service.

Service was restored sometime after July 20, but it is unclear as to how or why. According to Tom Byron, a spokesperson for LiveJournal U.S., the U.S. office was not notified. (The Daily Dot is so far unable to contact the Moscow office, since it is after hours.)

Byron confirmed that the outage and Bill 89417-6 are related.

“LiveJournal in Russia was apparently down for some time last week in relation to the this bill, but the downage was concentrated to a small area outside of Moscow,” he said. “I’m afraid this is pretty much all I know; LJ US has not been alerted to any issues surrounding the bill.”

Byron said that while Bill 89417-6 has been pushed as a privacy bill, he believes it “may in fact be a censorship tool.”

LiveJournal is the most popular blogging site in Russia, and its main function has shifted over the past few years from social networking to mass media. LiveJournal Russia was one of three major Russian sites opposed to Bill 89417-6.