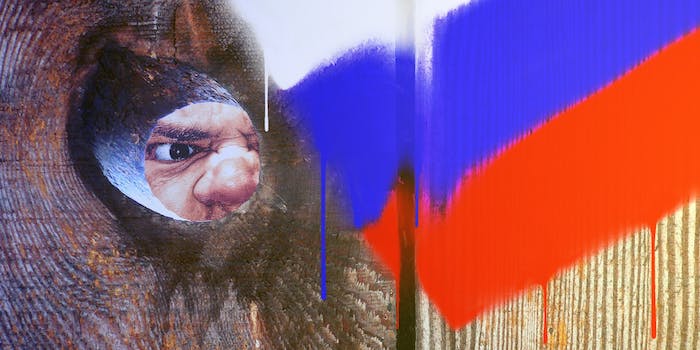 "I don’t have any property, but more important things remain in my custody: untainted soul and ideals, and I’m ready to protect them."

The founder of Russia’s biggest social network says he sold his remaining stakes in the company because his government demanded too much information on Ukrainian protesters.

In a post Wednesday evening, Pavel Durov, creator of VK—basically a Russian Facebook—wrote on his wall that he had sold his remaining shares to the company. His reasoning? That the FBS, Russia’s principal spy agency and the successor to the KGB, wanted too much information on organizers of the Ukrainian protesters, often referred to as the “Euromaiden” movement.

“On 12/13/2013 FSB demanded that we must produce personal data on Euromaidan groups organizers. Our answer was, and is, an unconditional no: Ukrainian VKontakte users are not under Russian jurisdiction. Releasing personal data of Ukrainians to Russian authorities would be not only violate the law, but would be a betrayal of millions Ukrainian residents’ trust.”

Durov has been referred to as Russia’s Mark Zuckerberg, given VK’s similarity to Facebook, but the two men are hardly similar: Durov is far more outspoken and prone to bizarre stunts. When former National Security Agency Contractor Edward Snowden received asylum in Russia, Durov wrote on his wall that he’d offered him a job. On April 1, he claimed he was stepping down as CEO, apparently as an April Fool’s day prank, though his own board seemed quite unamused.

Not a great deal is known about Russia’s spy apparatus, at least compared to the U.S.’s. There’s no Snowden equivalent who’s made thousands of classified documents public. During a press conference Thursday, President Vladimir Putin bizarrely took a question from Snowden, then assured him and the world that Russia didn’t have any spying apparati in place to monitor citizens en masse. This would seem to contradict news reports of the country’s System of Operative Search Measures (SORM), which is said to track potential dissidents.

“I don’t regret anything: protection of people’s personal data is worth it,” Durov wrote. “As of December 2013, I don’t have any property, but more important things remain in my custody: untainted soul and ideals, and I’m ready to protect them.”

Photo by procsilas/Flickr (CC BY 2.0) | Remix by Max Fleishman