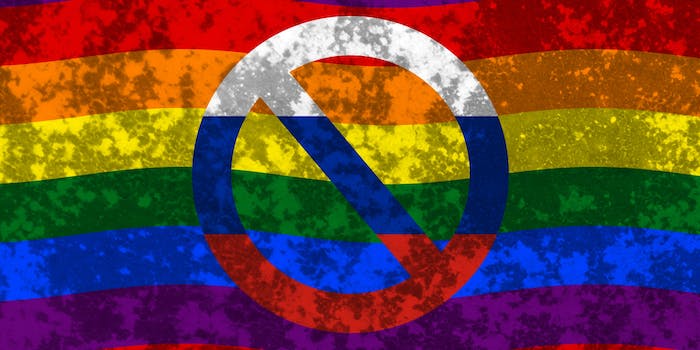 Russia will vote to ban LGBT people and their friends

Law would impose jail time, fines for 'coming out,' and even showing support for LGBT rights.

But next week, Russia could take state-sponsored homophobia to new levels when its parliament votes on a strict new law.

The State Duma is slated to decide on the law on Tuesday, Jan. 19, according to Russian news site Rusnovosti.ru. According to the report, the bill—first introduced in October—will impose jail time and fines for anyone who comes out as LGBT, men who display public affection in public, and even for merely showing public support for LGBT rights.

When the MP’s first introduced the bill in October, lawmaker Ivan Nikitchuk, who co-authored the bill, published a blog post on the Communist Party site calling homosexuality “a deadly threat to all humanity.”

“We have our own idea of honor and conscience, and we must respect tradition,” wrote Nikitchuk, according to a translation provided by Gay Star News. “The scum that comes to us from the West is unnatural to Russia.”

“These unconventional sexual desires do nothing but disgust normal, smart, healthy people,” Nikitchuk continued. “It is sick that disgusting people feel they should be treated the same.”

The new law, if voted in, would fine Russian citizens 5,000 rubles and send them to jail for up to 15 days for things like signing a gay rights petition, stating online that they are LGBT, or holding hands with another man on the street.

Oddly, the public affection portion of the bill applies only to men—women can still kiss in public, because according to the legislators they are more “reasonable” and able to “manage their emotions.”

“We do not prohibit that these people do what they do. But let them do it under a blanket or under the bed. But let them not demonstrate to the public their sympathies and aspirations,” said Nikitchuk, according to Gayrussia.eu.

Along with the bill’s co-sponsor, Nikolai Arefyev, Nikitchuk is presenting the proposed law because he feels the current ban on gay propaganda isn’t strong enough.

That ban, a 2013 law banning “the promotion of non-traditional sexual relationships” with fines up to 1 million rubles, passed with a nearly unanimous vote in the State Duma—of 436 lawmakers present, only one abstained and no one voted against it.

Because of the ease with which the gay propaganda law passed, Nikitchuk predicted that the coming-out ban would fly through the Duma as well.

“I do not think that the MPs dare to express their explicit support for homosexuals,” Nikitchuk said.