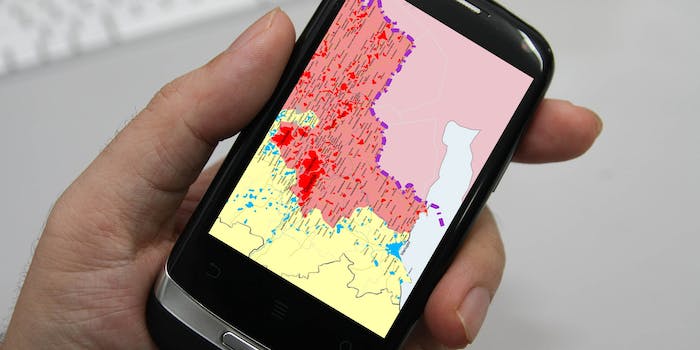 These days, all it takes is an Internet connection to dive into geopolitics.

War is waged on the ground and tracked through constant communications from all sides of a conflict. But in 2014, it is also being followed online.

Fueled by a pro-European Union revolution that toppled a presidency in February of this year, Ukraine has been split in which way to go for relations and economic pacts. It’s either the EU or Russia; and so east Ukraine has faltered into a conflict zone with pro-Russian separatists contesting for power in the region.

NATO declared there was increased Russian military movement across the border last week. Analysts say there are 7,000 Russian troops inside east Ukraine, along with 40,000 to 50,000 on the border. Russia claims no such thing is happening. They say only “volunteers” are heading into the region.

The Internet isn’t having it—because they’ve tracked it all along.

Reports from eastern Ukrainian cities, including but not limited to Donetsk, Kharkiv, Luhansk, and Mariupol, are often uploaded to several social media networks. The updates from the ground come in all forms, in photo uploads, tweets, and YouTube videos.

From there, the Internet gets to work. Citizen journalists, reporters on the ground, analysts, researchers, bloggers, small news organizations, and news followers are working actively online to track Russia in Ukraine.

LiveUAMap, a website hosting a customized Google Maps interface over the Ukraine-Russia region, located a few reports of Russian movement as early as Nov. 5,  both in Russia along the border and eventually crossing into east Ukraine.

Then, Interpreter Magazine, a project from the Institute of Modern Russia known for its liveblogging of the Ukrainian conflict for more than 265 days, came out with an update on Nov. 5 detailing an increase of violence and the National Security and Defense Forces of Ukraine saying Russian “personnel” were crossing the border.

As in any war or conflict, time is of the essence. And these followers are watching Ukraine tirelessly and wirelessly. Boasting updates on Ukraine for more than 200 days is the “UkranianConflict,” a Reddit live thread page, connecting people across the world to collaborate in following the crisis.

When LiveUAMap picked up movement near Donetsk on Nov. 8 and 9, many of these followers took to Ruptly TV. A branch of Russian-funded news network Russia Today, Ruptly often has live video at international news events. For Ukrainian locals, efforts have been put into Donetsk of eastern Ukraine, where months of clashes have taken place at the Donetsk International Airport.

Followers of the Ukrainian conflict will sometimes have live streams on for hours on end, in case of an event that can be heard or seen over the feed. They’ll then tweet or blog any updates.

Not a single shell in #Donetsk today. I am listening in since 9:30am. pic.twitter.com/ntcVQbrpkg

Along with YouTube videos of army tanks and large convoys posted earlier this month, it was a reminder war and conflict does not go by without any deep investigation. Ukraine is no stranger to that.

For example, several Twitter accounts and bloggers worked with those behind The Interpreter’s live blog to dig into a claim that Russian special forces were in Ukraine along roads, clearing the way for the incoming Russian military convoys. They dissected video, research, and photos would come to find some intriguing evidence.

Those at The Interpreter did it again the next day, geolocating tanks and military convoys to see where the artillery and weapons may have ended up in east Ukraine. They used images from videos and several tactics to pin down where and whose tanks they may be. What they discovered: Russian tanks just outside Donetsk.

This work by many across the Internet has not only focused on Russian activities in the last week, but also in the last few months. They were there tracking the several Russian humanitarian convoys into Ukraine and other smaller, perhaps secretive and underreported movements.

Following any kind of movement in war and conflict has long been a task done by the military and few other parties, but with the introduction of the Internet and personal technology, all that has changed. People across the world are chiming in and working together to watch history unfold. That includes tracking Russia in Ukraine today.