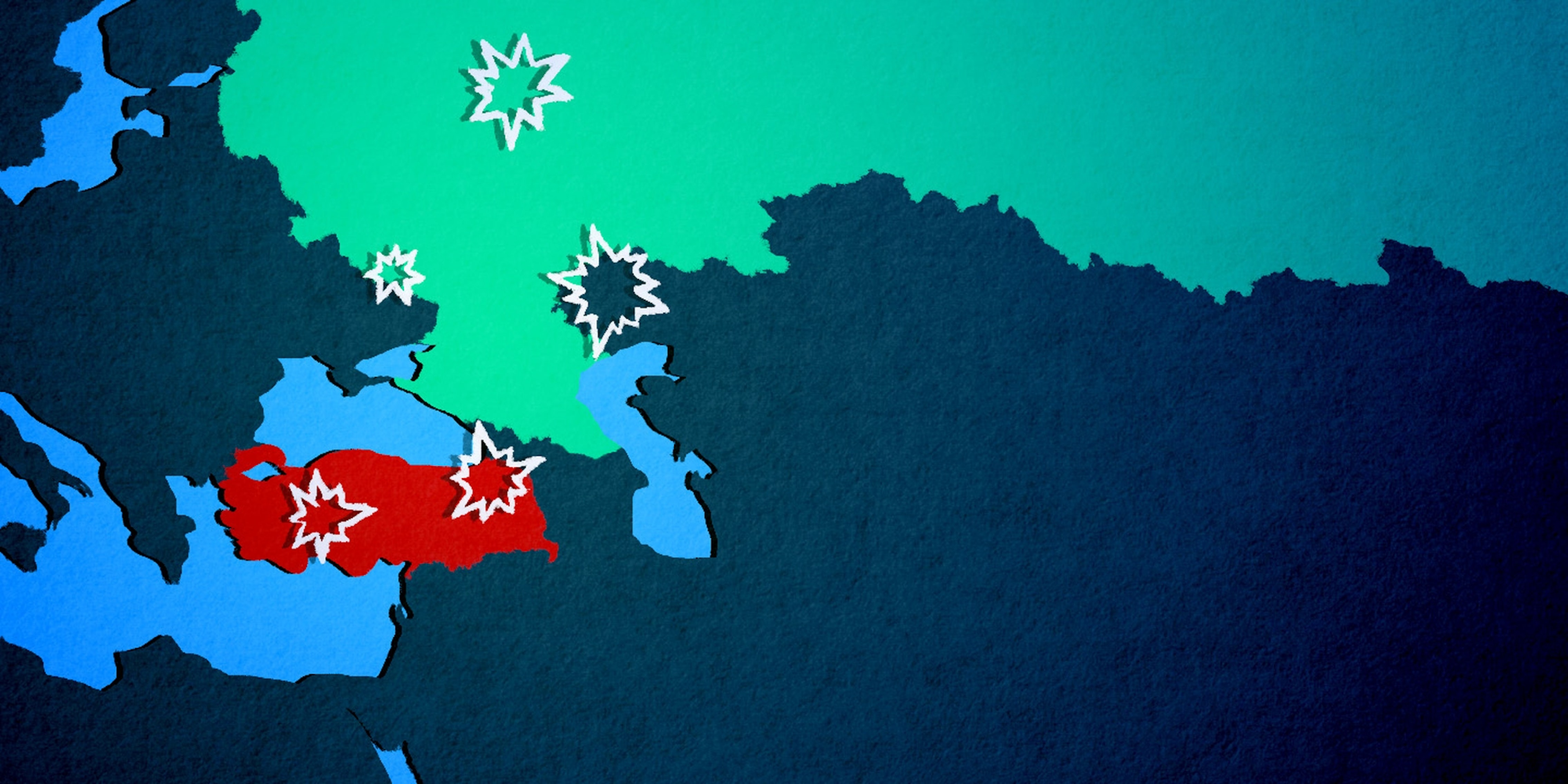 Inside the great troll war between Russia and Turkey

There's been no more bloodshed—but these mean tweets rage on.

When Turkey downed a Russian jet near the Turkey–Syria border in November, the relationship between the two countries immediately froze.

Online, however, a war was just heating up. For outside observers, however, it all likely looked like a big inside joke.

In a bombastic claim, Russian President Vladimir Putin’s administration alleged that Turkey and, specifically, the family of President Recep Tayyip Erdo?an, profits from the sale of oil commandeered by the terrorist group Islamic State. On Dec. 2, the Russian Embassy in the United Kingdom tweeted what it called “graphic evidence” of this lucrative business.

That cartoon octopus, it’s worth nothing, was featured on a 2013 editorial of a Russian opposition daily newspaper, Zavtra, describing what it called the Kremlin’s corruption network.

While ordinary Russians were gathering over the popular hashtag #?????????? (“#StabInTheBack”)—Putin’s choice of words to describe the attack on the Russian jet—Putin’s government propagandists had more sophisticated plans.

Maria Katasonova, the assistant of a nationalist Russian Member of Parliament—and who’s perhaps best known for reportedly producing fake videos of “Ukraine’s aggression” during Russian military campaigns in Crimea and Donetsk—shared this remake of a Turkish flag with a rat, along with other hashtags “Boycott Turkey” and “Turkey = ISIS:”

On the other side, Turkish Twitter users were also gathering around hashtags like #KillerPutin, a reference to Russia’s bombing of Turkmens rebels in North Syria.

But it was the government-backed “TrollState Russia” tag where Turkey’s organized Twitter response was most visible. The following cartoon shows a Russian soldier, perhaps the dead pilot, kicked out of Turkey, whose quote reads in Russian “We are stabbed in the back!”

In contrast to Russian media campaigns, Turkey’s effort against Putin and Russia was more professional in its imagery, language choice, references and organization, possibly because it was backed by Erdo?an’s Public Communications Officer, Mücahit Küçüky?lmaz. Here’s how Küçüky?lmaz initiated the Russian-language #??????????????? (“CalmDownRussia”) hashtag after Turkey shot down the plane.

By writing messages in Russian, the Turkish campaign had a clear target: the Russian public and Putin’s trolls. One since-deleted tweet openly mocks Putin and Russian Foreign Minister Sergey Lavrov by depicting them in women’s clothes—again using gender confusion as an insult. It’s accompanied by the text, “We are going to Honduras.” Honduras is the most recent country to sign a visa-free agreement with Russia, so the implication is that a fearful Putin and Lavrov would flee Russia. Few outside of Russia would get that joke.

That image was previously used in 2009, by Putin’s own trolls against his communist political opposition in Russia. At the time, the trolls Photoshopped former USSR leader Vladimir Lenin’s face onto the woman and her daughter, with a message “on the Finnish border”—mocking the fact that Lenin had fled to Finland back in 1907. Erdo?an’s trolls displayed a remarkable savvy of how to troll a troll.