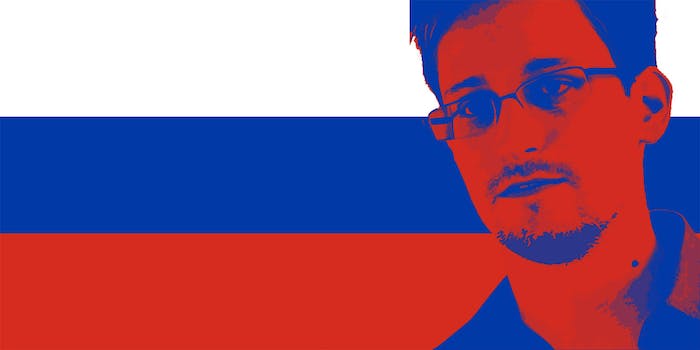 Did Russia identify Snowden as a defector six years before leaks?

An ex-KGB official says Edward Snowden was "tricked" into going to Russia.

Edward Snowden was identified as a possible defector by the Russian intelligence services a full six years before he became a whistleblower, a former KGB agent has claimed.

Boris Karpichkov, an ex-KGB spy who fled to Britain in the late 1990s, has alleged that the Russian government began monitoring the 30-year old Hawaiian in 2007, years before he made the decision to leak millions of top secret documents, sparking a global debate over the acceptable limits of government surveillance.

Snowden has been “tricked” by the Russian government into staying in Russia, Karpichkov added, in comments made to British newspaper Sunday People, and said agents meet Snowden “twice a week over plenty of food and drink.” The FSB (the Russian secret service), Karpichkov alleges, is interested in Snowden’s knowledge of Western encryption techniques.

Karpichkov claims Snowden “lives in a block of flats in Moscow’s suburbs controlled by the FSB … [that is] heavily alarmed to stop anything happening to him.”

Snowden, a former contractor with the National Security Agency, is currently effectively stranded in Russia after the American government cancelled the whistleblower’s passport and travel documents. The country granted him temporary asylum last year—which will expire on July 31, 2014. Snowden will have a year to appeal if Russia declines to renew his asylum. Karpichkov alleges that Snowden will remain in Russia for up to three years while the FSB extracts any and all useful information from him.

It was while Snowden was working for the Central Intelligence Agency (CIA) in Munich, Germany, in 2007 that the FSB allegedly first identified him as “ripe for defection” and subsequently opened a file on him. However, the FSB did not make an approach until after Snowden became a whistleblower and outed himself as such whilst in Hong Kong in 2013, whereupon the agency asked him to consider asking Russia for asylum.

Karpichkov defected from the Russian security services in 1998 and was granted asylum in Britain—nine years before the FSB allegedly first identified Snowden as a defector. However, Karpichkov is still in contact with “secret service cronies in Moscow now close to the Snowden case,” The Mirror reports.

Robert Baer, a former senior CIA official, has previously told the Daily Mail he fears Snowden may have provided the Russians with a “treasure trove” of secrets. The CIA is, he says, “looking at the possibility that information was passed on.”

“It’s a damage assessment,” Baer adds. “[C]learly what he saw in Geneva has to be looked at and it has to be assumed that he passed it on to Russia.”

Snowden has stated that he is no longer in possession of any of the leaked documents that he passed to the journalists Laura Poitras and Glenn Greenwald, as there would’ve been no benefit in keeping an extra set.