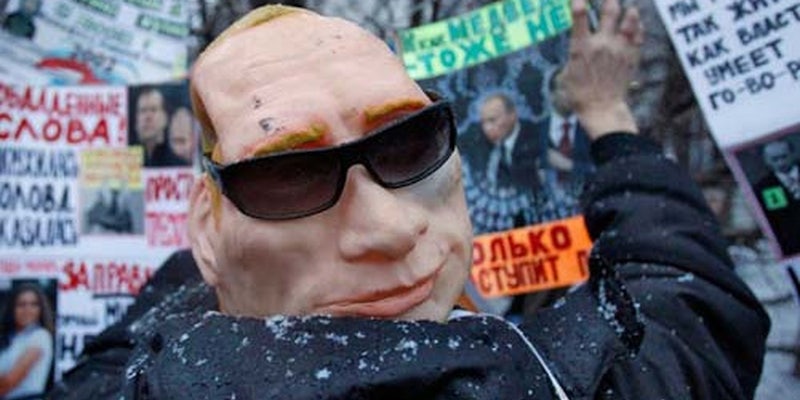 In the United States, when you black out major websites to protest legislation that could hurt the Internet, lawmakers listen.

In Russia, though, the lawmakers black out you.

Russian parliament approved a contentious new censorship bill, Bill 89417-6, on Wednesday. Ostensibly a means of blacklisting of Russian domains that promote illegal activity, it would allow the government to shut down websites if they don’t remove offending material within 24 hours of receiving a warning. Sites that include child pornography, instructions on how to commit suicide, or drug propaganda, however, don’t get that due process.

However, a number of websites popular in Russia, including Wikipedia, LiveJournal, and Yanex, the country’s largest search engine, said the bill would simply allow the government to squash other websites it doesn’t like.

To that end, those sites went on strike Tuesday, directing all visitors to a message that warned that their Internet freedom was in danger.

It was reminiscent of American sites going on strike in January to protest the Stop Online Piracy Act (SOPA), which, under the guise of squashing copyright infringement, also threatened to censor much of the Internet. Wikipedia was among the most popular sites to shield its content for a day, and the event led to lawmakers permanently shelving SOPA.

But such a protest simply didn’t sway the Russian parliament.

Gennady Gudkov, a member of parliament under the Just Russia party, called the governing body “a secretarial office that carries out somebody else’s wishes,” according to Agence France-Presse.

“The goal of the bill is to wipe out dissent in our country,” said another member of parliament, Anatoly Lokot of the Communist Party.

The bill doesn’t become law until President Vladimir Putin signs it, but there’s little doubt he will.

Putin has a reputation for supporting legislation that would stifle his critics. Earlier this year, he approved a measure that raised the fine for unauthorized protests against the government from $160 to $32,000.