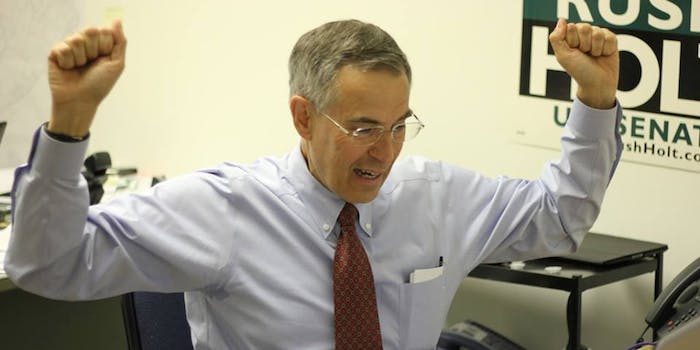 Congressman: My bill would kill NSA’s back doors

Now that we know the NSA can actually do that, maybe Rush Holt (D-N.J.)'s bill will get some traction.

Representative Rush Holt (D-N.J.) had a clear reaction when news broke that the National Security Agency has the shocking ability to get around most online encryption.

He was already trying to make that illegal.

On Thursday, Holt reminded reporters that he’d been working on criminalizing the act of installing workarounds in encryption, even before it was publicly established that the NSA had such an ability:

“I introduced legislation, the Surveillance State Repeal Act, that would make it illegal for the NSA to insert ‘back doors’ into computer hardware or software. These revelations give that proposal new urgency,” Holt said.

These new reports prove the urgency of his bill, he said—and the evidence of malfeasance on the NSA’s part.

The Surveillance State Repeal Act is but one of a number of bills launched in the wake of former NSA contractor Edward Snowden‘s many leaked documents that show how the agency can spy on people, including Americans. Holt’s bill was somewhat lost in that hullabaloo, though—perhaps because of a glut of similar bills, or because his was so comprehensive.

Only one bill to curb NSA surveillance has actually gone before a full House vote: Justin Amash (R-Mich.)’s amendment bill to defund its program of collecting telephone metadata on Americans. On the same day Holt introduced his bill, Amash’s was narrowly defeated in Congress.

Amash has since indicated that many members of Congress who voted against his bill would change their mind if given a second chance, and is optimistic about he or another representative trying again.