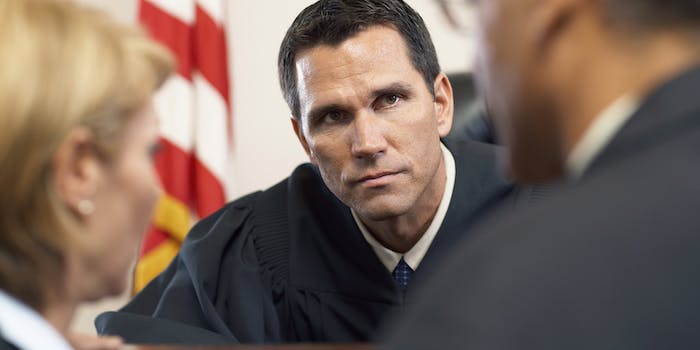 Judge rules: You are not your computer

Owning a computer is like owning a phone; there's no guarantee that you made every call.

In what might prove to be a landmark case, a New York judge has determined that an IP address identifies only the Internet account that a computer uses, not the person behind it.

An Internet Protocol (IP) Address is the series of numbers used to identify a specific computer to a network. Individual websites have IP addresses, but it is also the primary way that any computer browsing the Internet is identified.

If this ruling ends up setting precedent—and the judge, Gary R. Brown, clearly intended for it to do so—this can affect countless users accused of copyright infringement.

Since 2010, copyright holders have sued hundreds of thousands of BitTorrent users for illegally downloading their files. The tough part for companies doing the suing is that they can only identify those downloaders by their IP addresses, which don’t actually give a name—just the address of whoever pays the bill for the Internet connection.

As Brown noted, however, it’s by no means guaranteed that the person paying for an Internet connection is responsible for all the activity on it

“It is no more likely that the subscriber to an IP address carried out a particular computer function—here the purported illegal downloading of a single pornographic film—than to say an individual who pays the telephone bill made a specific telephone call,” he wrote.

But Brown cited the fact that the John Does provided a wide swath of alibis. In a ruling that must have felt epic to the defendants, Brown wrote:

The factual defenses presented are vastly different and highly individualized. One movant—John Doe #16—has stated that he was at work at the time of the alleged download.

John Doe #2 states under oath that he closed the subject Earthlink account, which had been compromised by a hacker, before the alleged download.

John Doe #29’s counsel represents that his client is an octogenarian with neither the wherewithal nor the interest in using BitTorrent to download Gang Bang Virgins.

John Doe #10 represents that downloading a copy of this film is contrary to her “religious, moral, ethical and personal views.” Equally important, she notes that her wireless router was not secured and she lives near a municipal parking lot, thus providing access to countless neighbors and passersby.

Though he’s not the first judge to find against a mass copyright lawsuit, Brown tried to make his ruling applicable to future suits.

“Any future actions of a similar nature in this district [should] be filed as separate actions as against each John Doe defendant, so as to avoid unfair outcomes,” he wrote.

Brown’s ire didn’t end there. In response to the pornographers’ claims that strict copyright enforcement is necessary to keep adult material out of childrens’ hands, he offered a parting blow:

“It is difficult to accord the plaintiff, which features ‘Teen’ pornography on its website, the moral high-ground in this regard.”