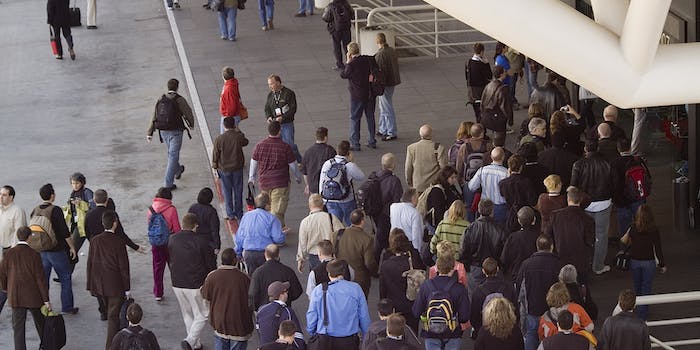 An information security conference is cracking down on using sex to sell.

You see them everywhere at events like CES or Mobile World Congress: Women in skimpy outfits hawking different products or services. Often called “booth babes,” or promotional models, these women are hired to represent the company and attract attendees, who are overwhelmingly male, to the company booths.

The practice is regularly criticized in an industry that’s fraught with sexism and discriminatory behavior, and yet both startups and major corporations continue to do it. But at least one major conference is putting its foot down, and banning booth babes altogether.

At the RSA Conference, an information security conference in San Francisco April 20-24, you won’t see any scantily clad women wearing Lycra body suits or pleather mini-skirts. The conference introduced new rules for what attire is appropriate at the event, and says that if anyone violates the policy, they’ll be asked to change or leave.

Attire of an overly revealing or suggestive nature is not permitted. Examples of such attire may include, but are not restricted to:

These guidelines are applicable to all booth staff, regardless of gender, and will be strictly enforced.

“The new language in our Exhibitor Rules and Regulations was added to ensure that we provide an environment that is both professional and respectful of all attendees,” Sandra Toms, vice president and curator of the RSA Conference said in a statement to the Daily Dot. “We want everyone to feel like they can comfortably enjoy all of the sessions and activities that this year’s show has to offer.”

According to Fortune, about 30,000 people are attending the RSA Conference this year, about 15 percent of which are women.

Using booth babes remains a popular form of marketing at many trade shows, primarily at tech conferences. But they neglect to drive any real sales, instead serving as a way to make attendees feel uncomfortable and underscore the obvious gender inequality of workers in the technology industry.

But the RCA Conference’s actions mean the industry just may be listening. And while some other conference leaders think the problem will just solve itself, people in charge of this particular event recognize the part they need to play in order to make tech events a more respectable and comfortable place for everyone.