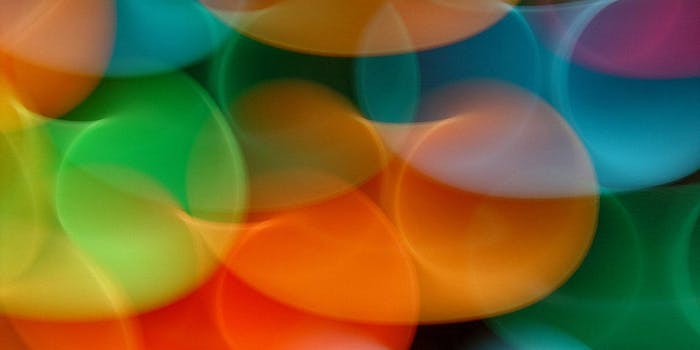 This app can tell you what the color blue sounds like

What does green sound like? What about orange, purple, or white? If this sounds like a line of questioning usually caused by mind-expanding, you’ve never experienced Roy G. Biv, a smartphone app that quite literally turns sights into sounds.

Using the unusual music synthesizer—which is available on both iOS and Android devices—is as simple as pointing your phone at any color you desire and then tapping one of eight on-screen keys. An additional four touch buttons let you add sample sound effects to the tune, but the largest change you can affect on each impromptu music track is accomplished by simply moving the device to capture a new color, and thereby a new selection of tones.

The fact that Roy G. Biv exists at all is cool… but why does it exist? What’s the purpose for such an app?

“There are already a lot of really innovative music apps, and also too many brilliant camera apps to name, but not a ton of apps that use the camera as a non-photo input device,” Roy G. Biv creator Julian Glander tells the Daily Dot. From this inspiration, the app evolved into something quite unique.

The way the app translates color into sound is pretty ingenious, and Glander was kind enough to pull back the curtain a bit. First, the app captures a color from the device’s camera, then uses the hue, saturation, and brightness of the color to set the waveform, oscillation, and attack/decay times of the music. This leads to a near endless number of combinations and, by extension, a massive range of possible audio output. Roy G. Biv is a toy (and an amazing one at that) but depending on how your brain interprets the sound, it could be much more. “To me the bright green tone in Roy G. Biv sounds like a creepy hovering alien spaceship,” Glander says of the high-pitched tone produced by a neon shade of green. “The same sound might remind someone else of a beautiful field of grass, or their dead pet frog, or anything else they might want to project onto an iPhone app.”

As for the future, Glander says he’s quite pleased with the app presently, but input from the community might be too amazing to ignore. “A few users have given me some really insanely good ideas that’ll definitely make their way into a future version of RGB.”

Photo by josefstuefer/flickr (CC BY 2.0)