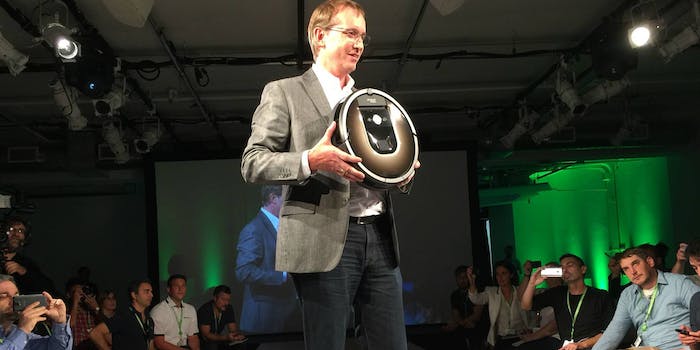 A new fleet of cute, circular robots will be mapping people’s homes by the end of the year, and homeowners will pay handsomely for the privilege.

Today, iRobot, the consumer robotics company most famous for its Roomba vacuuming robots, announced its newest model, the Roomba 980. The perpetually recognizable robot retains its physical appearance almost entirely—it’s been made with a slightly lower profile to better get under couches and beds, but it remains an electronic vacuum-cleaning disc with a big button on top labeled “Clean.” The true difference between the 980 model and the others is on the inside. This robot makes use of VSLAM, a technology that iRobot has been developing for well over a year and a half. That acronym stands for “visual simultaneous location and mapping.” Instead of following an algorithm to ensure it vacuums every square inch of floor, the Roomba 980 builds a visual map of your house to track its own movements, knowing precisely where it is in your home the entire time.

Today in New York City, iRobot CEO Colin Angle helmed a press event to elaborate on the latest addition to its robotic stable. With a perhaps grandiose comparison to Lewis and Clark, Angle described how the famous explorers of America’s western territory took 18 months to reach the West Coast, but only took 6 months on the return trip. The map they built as they traveled not only made it vastly easier for the pair to return, but it enabled the next generation of travelers to more easily follow the trail they blazed.

“The wilderness is your home, unmapped,” said Angle. “Roomba and [iRobot’s floor-mopping robot line] Braava are the explorers.” Previously, Roomba relied on algorithms to cover most of a floorspace, but this “didn’t matter,” he continued. “Roomba didn’t know where it was. Our goal is not to clean part of your home, our goal is to clean your entire home.”

Since the 980 knows where it has already cleaned and where it has yet to clean, its process is far more efficient than previous Roomba models. According to iRobot Executive Vice President Christian Cerda, it can “get from one place to another, use energy optimally, and run for 2 hours.”

Along with this release, iRobot has developed its first smartphone app to let you control your vacuum cleaner over the Internet. One could hypothetically be at work, realize he needs to start the vacuum at home, and do so with nothing more than a button push inside the app.

The main reason for the app’s development is that “people weren’t scheduling Roomba,” said Angle. The Roomba line has long supported a customized, recurring schedule for vacuuming sessions, but the CEO said people found the “idea of interfacing with Roomba buttons too intimidating. People didn’t do it, so we made it easy.” If you can check your email on your smartphone, you can schedule your personal robot housekeeper to do your bidding even when you’re not around.

The Roomba 980 will be available in Canada and America on September 17 for the retail price of $899. Japan and a limited number of European countries will see the gadget early in Q4 this year.

The newest Roomba is no Rosie the Robot—but it’s not that far off either.