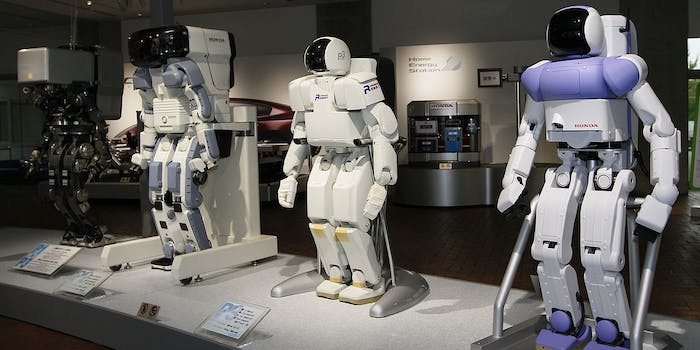 A hotel where the butler is a robot in a bow tie? Sign us up.

Today in proof that we are living in the future: room-service robots are a thing.

In a clear sign of the times, many room-service tasks at California’s Aloft Hotel been taken over by robot butlers. You can see one in action in this video, where YouTuber Scott Sigrist opens his door to be find what looks like a very high-tech trashcan with an iPad on the front.

Adorably, the hotel has made an effort to anthropomorphize the robot butler, giving it a bow tie and blinking eyes and having it ask, “How did I do?” after it performs its delivery. Unfortunately, once you start thinking of the robot as a cute, Wall-E like companion, it becomes weirder to realize that you just fetched some towels out of its body cavity.

On the whole, we’d rate this hotel robot as both lovable and useful. We’re not so sure about humans, though, as the video’s first YouTube comment will attest.

This is why we can’t have nice things.