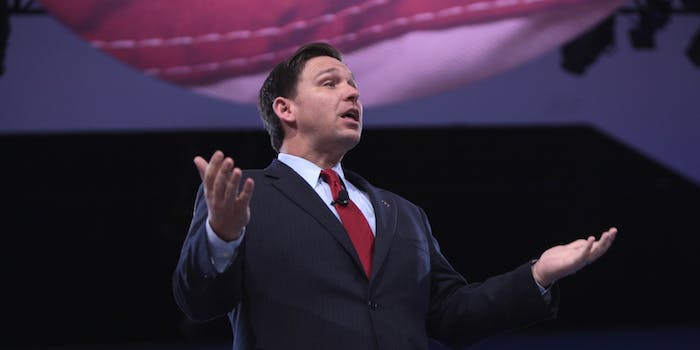 The Washington Post reported Sunday that on four occasions between 2013 and 2017, DeSantis talked at conferences organized by the David Horowitz Freedom Center, a think tank described by the Southern Poverty Law Center as devoted to promoting “anti-Muslim, anti-immigrant, and anti-Black movements.”

In a 2015 speech delivered at the conference, DeSantis heaped praise on Horowitz, of whose work he said he was “an admirer.”

Horowitz, a former leftist, is known for having made several inflammatory and controversial remarks about race in the past, even alleging that there is a “serious race war” against “whites.”

A spokesperson from DeSantis’ campaign told the Post that the candidate did not “buy into this ‘six degrees of Kevin Bacon’ notion that he is responsible for the views and speeches of others.”

Despite seeking to distance himself from other conference attendees and its controversial organizer and denying that he is racist, DeSantis’ own conduct has come under scrutiny in recent weeks.

In late August, he was accused of using racially charged language to refer to his Democratic opponent’s campaign. Days later, he was exposed as an administrator for a conservative Facebook group featuring racist political memes. Combined, the incidents underlay serious questions about his newly revealed affiliations.

Right-wing media outlets quickly pivoted to deflect what they viewed as a liberal attack on the Republican nominee.

Breitbart News blasted the Post for its “guilty-by-association tactic to unfairly smear DeSantis.”

“The Post‘s article is yet another media-created attempt to boost DeSantis’ Democratic opponent using misleading reporting,” Breitbart responded. “There is still no proof that he has done or said anything bigoted, and even the Washington Post‘s best efforts have yet to show otherwise.”

Back-linking to the article, conservative website the Daily Caller published that “despite DeSantis vehemently denouncing racism, the media has continued to portray him as a racist.”

Amid the news, DeSantis announced on Monday that he had resigned from Congress to devote his time fully to campaigning.