This robot is just a baseball pitching machine, humanity is safe for now

Robots may destroy humanity, but it won't be this one. Probably.

Robots will eventually overtake humanity and destroy us and the measly civilization we spent 200,000 years building. But they still won’t be able to make baseball interesting.

Before the start of a game between the Chicago White Sox and Cleveland Indians, a metallic arm known as “Baseball Bot” tossed out the first pitch—a tradition generally reserved for humans. If the toss signified the start of the game or the start of the robotic takeover is unclear, but as far as robots go, Baseball Bot is perhaps the least threatening. It had to be rolled out to the mound and plugged in by handlers (human slaves?) to complete its mundane task—one that has been handled successfully by its early ancestors, the pitching machine, since 1897.

Baseball Bot’s real task was less about the pitch and more about marketing. Provided by industrial robotics producer FANUC, the bot was brought to catch the eye of curious ballpark goers in hopes to lure them over to the Google.org-supported Robot Revolution exhibit at Chicago’s Museum of Science and Industry.

“We’re trying to reach out to younger kids and get them interested in robotics,” FANUC engineer Brian Garcia told the Daily Dot. When the White Sox presented the opportunity to promote the museum’s exhibit, Garcia jumped at the chance.

The bot that took the field wasn’t built specifically for the purposes of pitching; it’s one of many capabilities the versatile machine is capable of. The LR Mate 200iD Mini-Robot, an existing popular model that is used in a wide variety of industries, from food processing to health care to assembly lines. 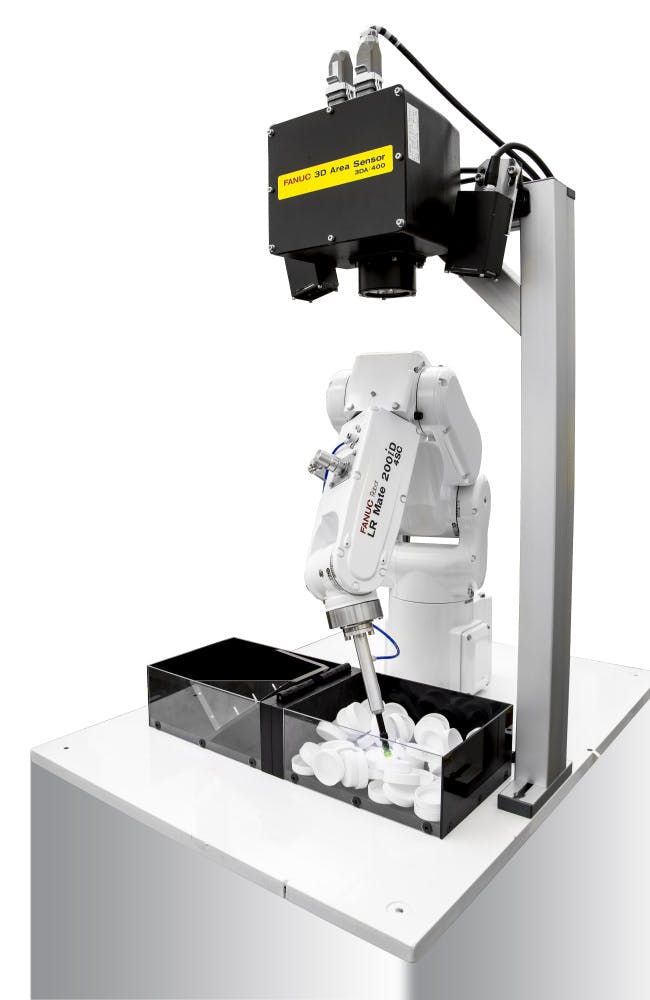 “We took the LR Mate robot and really just programmed it in an afternoon to make a pitch,” Garcia said. “We picked that arm because it’s small and affordable, it didn’t weigh 700 pounds and could run off regular voltage.”

There were some limitations when it came to building the modern pitching machine put in place by the White Sox, as well, presumably to not startle anyone with the power of machines. “It’s only allowed to throw 40 miles an hour, we weren’t able to go out there and throw a 100 mph fastball,” Garcia said with a hint of disappointment.

Fixing up the robot to turn it into a pitcher was a surprisingly quick process thanks to the machine’s flexible nature. Garcia said from the time they began building an appendage to hold the ball to the time they had it throwing, “it was really about an hour’s worth of work.”

“We could pull that little tool off of it that holds the baseball and put a gripper in it and it could be packaging gum or syringes or something just as easily and just as quickly,” he said.

“They’re great because the way our robots are designed and programmed, you can have a little tabletop unit like that and learn all the basics and you can step right up to our largest robots which are capable of picking up cars.”

While the opening pitch was just for show, Garcia sees some potential partnership opportunities in robotics and athletics. When Garcia’s brother, a college baseball coach, learned of the project, he asked about the possibility of turning the Baseball Bot into an actual, serviceable pitching machine.

His brother asked, “Do you think you could program one to throw a curveball?” To which Garcia said, “Sure.”

“If you dedicated the resources to designing the proper tool and programming it in such a way, you could make variable to where you could throw different pitches,” creating a more advanced batting practice where hitters could take a variety of looks without wearing down the arms of coaches or pitching staff.

Baseball Bot and all its cohorts will be on display at the Museum of Science and Industry in Chicago through January 2016. It might be the last time it’s humans looking at robots on display and not vice versa, so make sure you stop by if you’re in the area.