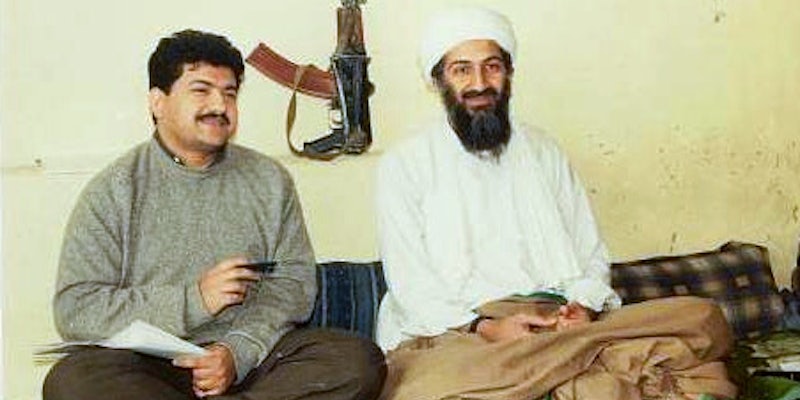 SEAL who allegedly killed bin Laden: He ‘died like a p***y’

The veteran who allegedly shot Public Enemy #1 gets real.

In a Friday night segment on CNN, freelance journalist and former CNN correspondent Alex Quade told Anderson Cooper about the year and half of interviews she conducted with Rob O’Neill, the former Navy SEAL who claims to have been the person who shot Osama bin Laden.

During the interview, Quade shared a handful of perviously unreleased audio clips of interviews where O’Neill talked about everything from how his team psyched themselves up in the days and hours preceding the 2011 raid on bin Laden’s compound in Abbottabad, Pakistan, to how he has dealt with the criticism he has received since first going public with his story last year and then finally revealing his identity last week.

However, the most ear-catching thing O’Neill said had to do with the way in which bin Laden died.

O’Neill, who has spent his time after leaving the military as a motivational speaker, said that even though he never specifically disclosed his involvement in the raid that killed bin Laden during his speaking engagements, he would sometimes drop hints when he encountered someone who had a friend or family member die in the attacks.

“Osama bin Laden died like a p***y, that’s all I’m telling you,” the military veteran recalled telling people. “Just so you know. He died afraid. And he knew that we were there to kill him.”

Quade told Cooper that she met O’Neill at a small gathering of military veterans who were suffering from post-traumatic stress disorder. There, she heard O’Neill first talk about his experiences and then continued talking with him over the ensuing months.

One topic of conversation during their interviews involved how O’Neill and the rest of the SEAL Team Six, the elite military unit that conducted the raid, mentally prepared themselves for what, at the outset, seemed like a suicide mission. In the audio recording, O’Neill recalls there was two-and-a-half day window between when they were given the green light to go on the mission and when it actually occured.

During that time, O’Neill noted that a profound sense of fatalism prevailed. “We knew we were going to die. We knew we weren’t coming back, let’s put it that way. Maybe not die right away but end up in Pakistani prison and die soon after. We talked about that,” he said. “[It was a] group of guys who knew their time on Earth was up, so you could be honest with each other. We all accepted it and nobody was afraid. It was really cool.”

O’Neill added that the key was connecting what they were about to do with events of 9/11. “The way we put it was, the single mom who went to work on a Tuesday morning and… few minutes later, decided to jump instead of burning to death, and her last gesture of human dignity was straightening out her skirt. And then she jumped. You know, that’s why we went, for her,” he explained. “You have to pump yourself up to go die. So we would talk about this.”

Since O’Neill’s announcement that he was the one to pull the trigger on bin Laden, he has been the subject of sharp criticism from other veterans who have called him an opportunist and accused him of misstating what actually happened.

In interviews with the Daily Beast, a number of former special operations officials, along with some other people who were allegedly involved in the raid, “accused O’Neill of misstating key facts and wrongly taking sole credit for killing the world’s then-most wanted man.”

For his part, O’Neill chalked this up to the tight-lipped culture of the Navy SEALs, where speaking out about what you’ve done is considered far less acceptable than in other branches of the U.S. armed forces.

You can watch the full segment and listen to the recordings on CNN’s website.