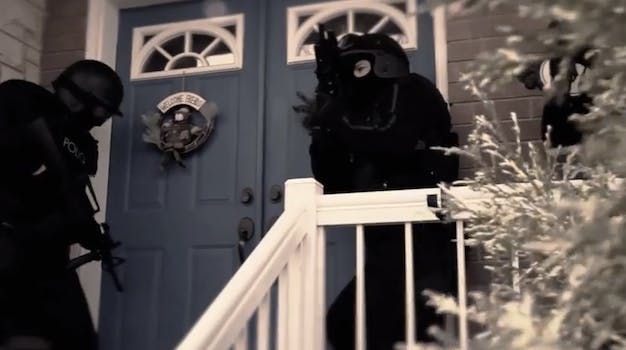 Based on the arrests of Richard O'Dwyer and Kim Dotcom, the short film by Political-Prostitution.com envisions a future its creators say is not far off.

It opens with a seemingly innocent scene: A film lobbyist, the American Motion Picture Association, hires a new President, Chris Rodd, who promises to protect the industry’s intellectual property: “I stood and continue to stand for the protection of intellectual and artistic property rights for as long as people will listen. And they will.”

Then, with production values approaching Hollywood’s, the scene shifts to London, where special forces break into a family’s home to violently arrest a young man. The crime, which one of the captors finds incredible, is copyright infringement.

It’s terrifyingly reminiscent of a few recent cases: most notably those of Richard O’Dwyer, who ran a website that provided links to copyrighted feeds of TV shows and movies, and Kim Dotcom, the founder of the storage locker site Megaupload.

In 2010 British police, in conjunction with U.S. officials from Immigrations and Customs Enforcement, raided O’Dwyer’s mother’s home for his computers, then arrested him—an event O’Dwyer’s mother, Julia, described as the beginning of a “nightmare.”

In the end, the video is an ad for Political-Prostitution.com, a protest website that highlights a few “victims,” among them O’Dwyer and Dotcom, and “perpetrators,” like Dodd and British Home Secretary Theresa May, who signed an extradition order to allow O’Dwyer to be tried in the U.S.

But who made it?

Just two activists who prefer to remain anonymous “due to the poisonous environment which is created around this whole copyright issue, we don’t want this stuff affecting our daily lives,” one of them told the Daily Dot via email,  “We have nothing to gain from this.”

We do not work in the same sphere, however what is happening right now is simply appalling, and we decided what we will do our part, and at the very least, educate as many people as possible about literal realities of copyright enforcement at any cost that is currently happening.

It cost them $5,000 to make, the emailer said, by the time they’d hired a professional director and video editor.

“Its not meant to be an accurate account of what exactly happened, it’s more of a clairvoyance in terms of what could happen, and to be fair, we are not very far from it,” the email read.

Julia O’Dwyer indicated to the Daily Dot that as upsetting as it was, the raid on her home wasn’t as violent as the one in the video.

“But I hear it resembles what happened to Kim Dotcom!“ she said.