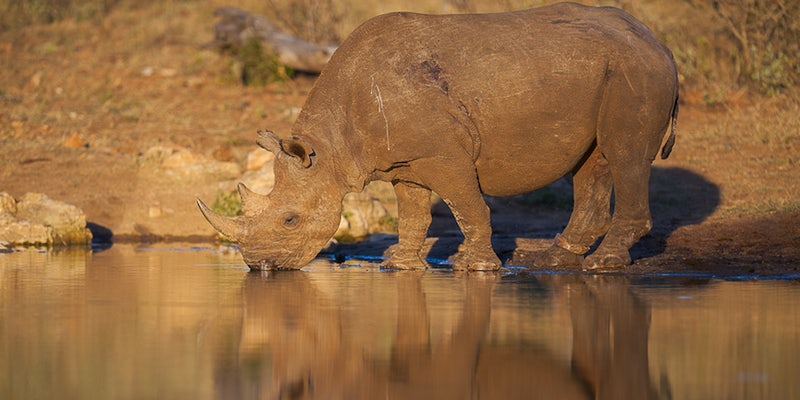 Rhinoceros continue to be murdered for their horns, coveted by people in different parts of the world as pieces of art, handles for weapons, and most frequently for medicinal and homeopathic purposes that span centuries of tradition.

Poaching has decimated the rhino population, especially in recent years. The western black rhino, a subspecies of the black rhino, was declared extinct in 2011, and only five northern white rhinos remain, all in captivity. Though conservation efforts have helped increase the number of rhinos left in the wild to almost 30,000, poaching numbers have skyrocketed since 2008. According to a report from The Guardian, 1,200 were killed in 2014, up from 1,004 in 2013, and 448 in 2011—compared to 83 in 2008.

Matthew Markus thinks he has a solution—create genetically identical, synthetic rhinoceros horns through 3D-printing. Pembient, the year-old startup founded by Markus and biochemist George Bonaci that recently completed the IndieBio accelerator program in San Francisco, creates synthetic horns in powder and solid form from biological materials that make up the rhino horn found in nature.

Markus’s passion for using code and DNA sequencing to solve biological problems goes back to the 1990s when, as a computer programmer, Markus began researching rhino poaching. But by the mid-90s, the crisis had abated. Now, with a background in statistical genetics at a time when poaching is a growing crisis, Markus decided to try once more at creating a synthetic solution.

“One nice thing about computer programming is you can copy a program for very little marginal cost, I can give it to you and still retain a copy of it, and doing so there’s no fighting or violence or anything around that because it’s so readily easy to do,”  Markus said in an interview. “I thought wouldn’t that be cool to do with biological objects.”

To create the horn, Pembient gets keratins, the proteins that make up the majority of the horn, and uses synthetic biology to express those genes in other organisms and filter out keratins that are unique to the rhino. They are then pushed through a chemical process that combines other biological molecules including melanin and sulfur that make up the horn, and constructs a matrix that brings them all together. Information-carrying molecules like DNA are added to the mix, and when the solution finally dries, it forms a powder. The bio-printed result ends up looking like a rhino horn. 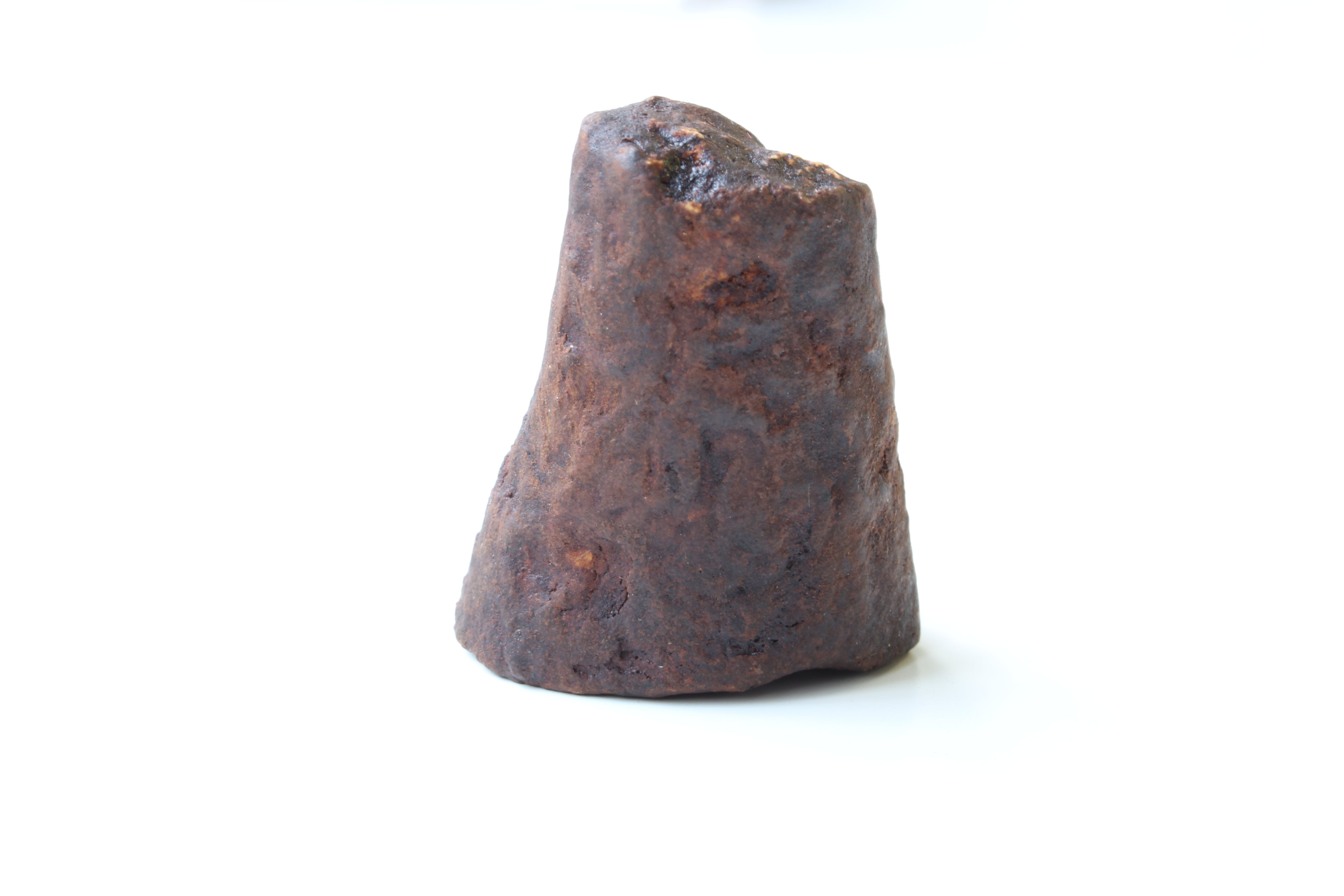 As technology like DNA sequencing and synthetic biology continue to advance and become more accessible and affordable to startups, manufacturing biologically equivalent rhinoceros horns could be a potential solution to the poaching problem that’s on track to leave thousands of rhinos dead this year.

Markus’s stance on rhino conservation is different from the approach environmental and animal rights organizations take to stop poaching. He believes that by eliminating access to rhino horns and other biological materials like tiger bones or elephant ivory—two other animal products that are used in traditional arts and medicines—ancient traditions would also disappear. Instead, providing lab-based solutions could help preserve both the animals and the culture. 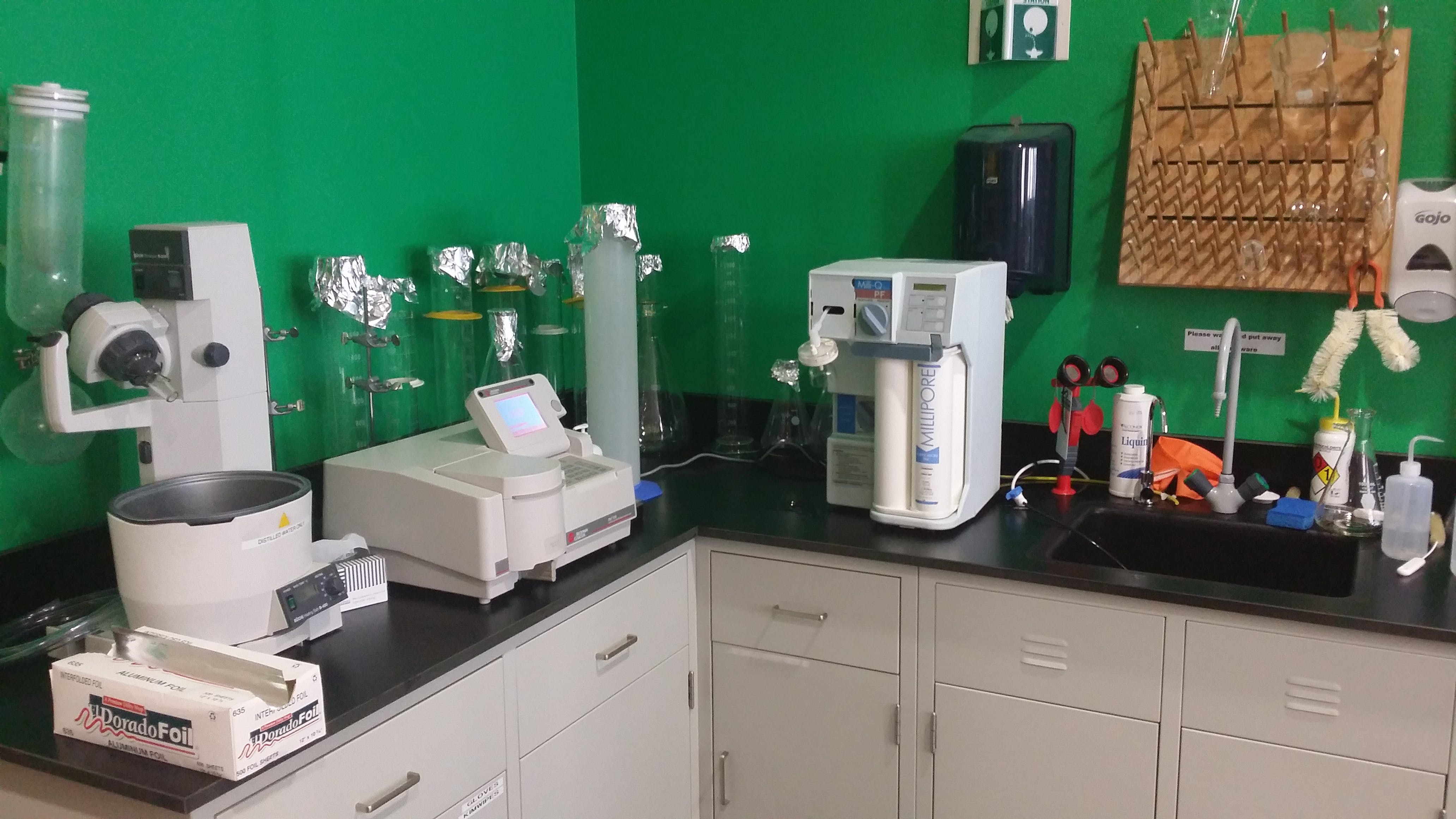 “Conservationists say ‘stop this practice, stop that practice,’ and it’s a zero sum game—all these traditions are going to die or all these animals are going to die, and I find that kind of horrible,” Markus said. “I think it would be great if you could basically provide products without harming the environment or the animals that can be used to carry on some of these traditions.”

In a way, he said, it’s like providing fake trees for Christmas instead of cutting down real ones in the woods.

The technical approach to solving the rhino poaching crisis isn’t without detractors. Two major organizations working for the protection of rhinos and eradication of the distribution of rhino horn products published a joint statement decrying the practice of producing synthetic rhino horns to stop poaching.

Pembient has experience with nonprofits unaccepting of the company’s mission. On a trip to Vietnam to discuss the project with Education for Nature, Markus learned that the group tries to eliminate the market for rhino horn by “demanding reduction,” of the product. The organization crafts the message specifically to teach people to stop using the product in the first place. Volunteers told him that if it switches messages, it would end up confusing the marketplace.

International Rhino Foundation and Save the Rhino International said that lab-created rhino horns won’t help save rhinoceros, and could, in fact, reduce the stigma surrounding purchasing rhino horn and products made from it, leading to an increase in the sale of illegal horns. The groups also said that more than 90% of rhino horns in circulation are fake, carved from buffalo horn or wood, two substances commonly used when actual rhino horns aren’t available.

The statement also notes that law enforcement struggles to crack down on the black market sale of rhino horns and other animal products, and adding synthetic product could confuse the issues further. When legalized biological products enter the market, it could prove difficult to regulate if not sold through pre-approved vendors or with identification that ensures it’s a Pembient product, rather than something produced after killing an animal.

But Markus said while it’s possible to create horns in a lab, that’s not what his company is planning on doing off the bat. And they won’t necessarily be selling whole horns to individuals or black market dealers.

Instead, Pembient will focus on the powder product, and work with different partners to sell the powdered horn as an ingredient. The product will be branded and packaged much like beauty products or healthcare supplements, and companies can work with Pembient to include rhino horn as supplemental ingredients in their items, and individual sellers in emerging markets can get microloans to begin distributing the animal-friendly products.

“At the end of the day what we’re building is indistinguishable from, or, at least, it would cost more to determine its authenticity, than the product itself,” he said. 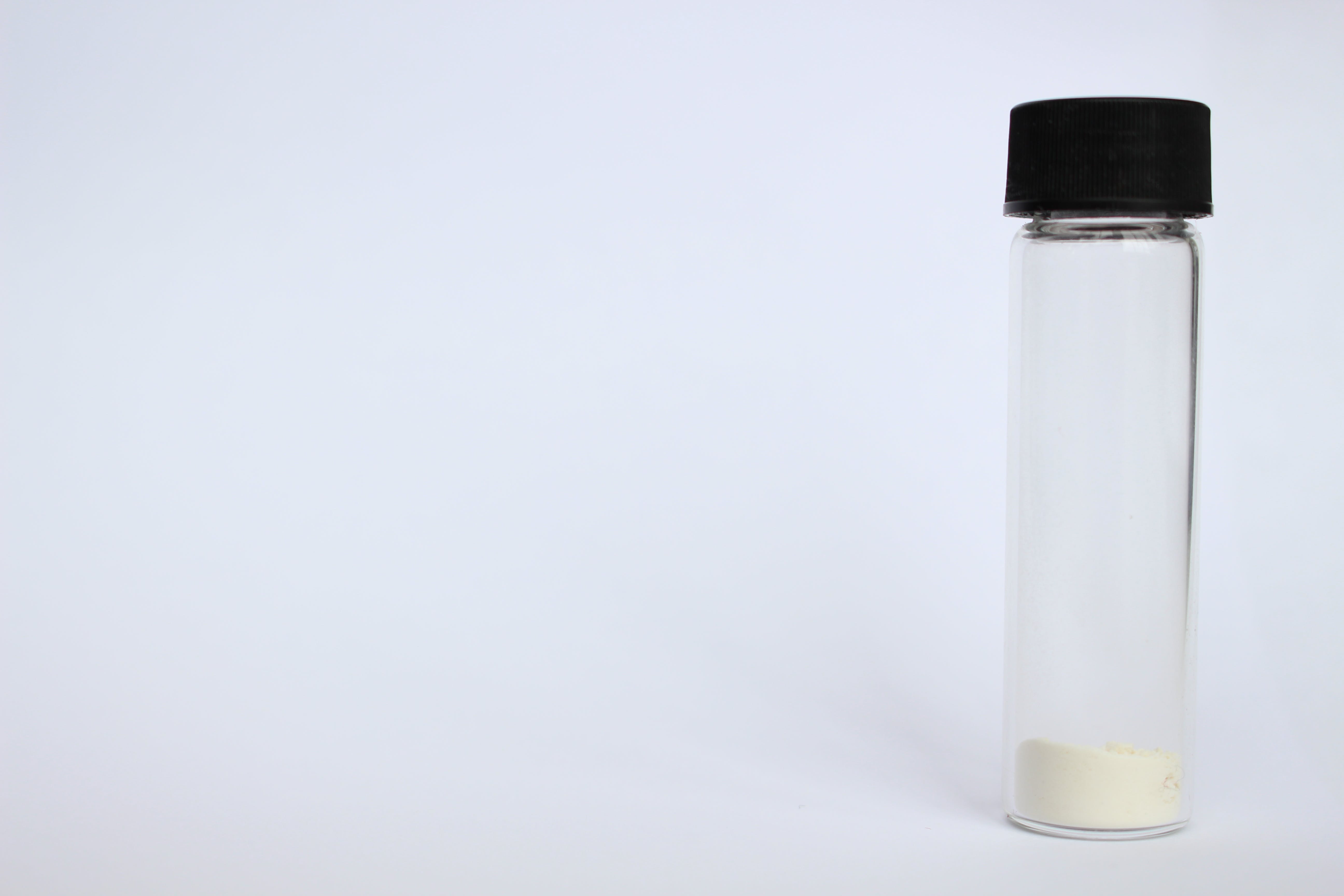 Pembient has already secured a partnership with a craft brewery in China, and will be test-marketing an initial product—powder mixed with beer—in the fall. It’s a limited run, and will test the waters for future partnerships and inclusion in more consumer products.

Because the product is manufactured in a lab, Pembient can create horns and powders that are free from impurities, like pollution or other unhealthy toxins that might be absorbed into a rhino horn in the wild. The product is more pure than what a customer would get from dealing illegally, and if someone practices certain healthcare remedies that require a rhino horn, it would make more sense to buy from a U.S. dealer that can guarantee the product was created safely, with no impurities. Rhino horn becomes a luxury product.

In this way, the rhino horn trade is a bit like the manufacturing and distribution of street drugs—lab-made pharmaceuticals are usually higher-quality than street drugs that can include cutting agents that make the drugs less potent or pure.

“We’re from Washington, and we look at the marijuana trade a lot as some sort of analogy. When you look at the cross-border trading of marijuana, it’s way down between Mexico and the U.S. because people prefer to buy from legal, tax-paying businesses,” he said. “No one’s like ‘Let’s go shopping on the black market.’”

Some government agencies and environmental groups advocate for the farming of rhinos to legalize the production and distribution of rhino horn, much like the farming of crocodile skins and other animal products that come from endangered species. Scaling the farming of one of the world’s oldest creatures is one of the difficulties advocates of this solution run into.

There are 30,000 rhinos left in the wild, meaning there are about 150,000 kilograms of horn available, but the demand per year can exceed as much as 300,000. If poachers and dealers met the true demand, rhinos would be extinct in half a year. Even sustainable farming would be unlikely to reach that demand in the near future.

A kilogram of rhino horn is worth as much as $60,000—more than the price of pure cocaine or some precious metals. Markus said that lab manufacturing can drive that price way down. Pembient can create product that would retail for one-eighth of the black market price.

Pembient isn’t stopping at rhino horns. Markus also has plans to recreate hard materials like ivory or tiger bone. And even potentially manufacture synthetic biological artifacts from species that are already extinct, like a sabertooth tiger or a mammoth.

To that end, Pembient and scientific partners want to do more to advance synthetic biology beyond a product, and give back to the scientific community. The company, along with Dr. Charles Murry, professor of pathology, bioengineering and cardiology at the University of Washington, launched the Black Rhino Genome Project, an attempt to sequence the genome of Diceros bicornis minor or the south-central black rhinoceros, a subspecies of the black rhino. Only a few thousand of these rhinos remain.

Genome sequencing is complete for the endangered southern white rhino, but the Black Rhino Genome Project wants to analyze the DNA of all black rhino subspecies, including those that no longer exist—and there’s a possibility of a future project in which scientists could bring back one of the extinct subspecies using one of the existing subspecies.

For now, the group is running a crowdfunding campaign to kick off the initial efforts—but the possibilities of tissue engineering through genome sequencing are endless.

Now that the team has finished the accelerator program, Markus will travel to Vietnam and China to test the product and find potential partners, both businesses and nonprofit organizations, to help further the production of lab-created rhino horn.

“I love animals, dogs, but I wasn’t necessarily in love with rhinos before this—but I’ve come to love them,” Markus said. “It’s more about solving a problem and trying to come up with a different type of solution.”