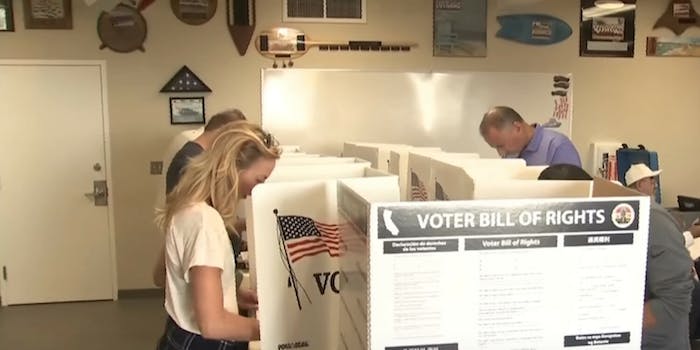 Republicans about to lose seats in the state legislatures of four key swing states are making moves to curb the power of the Democrats who will replace them with a rush of new legislation aimed at state voting laws and voting rights.

Wisconsin, Michigan, Ohio, and North Carolina have all seen a push since the midterms by Republican lawmakers to strip newly elected officials of their ability to oversee electoral legislation during lame-duck legislative sessions.

Interestingly, in every one of these four states, Republicans managed to control a majority of seats while winning a minority of votes. The party’s minority rule success in these legislatures, however, can be credited almost entirely to its long-running partisan gerrymandering strategy.

Many commentators argue that North Carolina was where Republicans first deployed the tactic of seeking to sabotage the opposition’s success in an election and, as such, dubbed it the “New Carolina precedent.” In 2016, the Republican legislature rushed a series of bills that would damage incoming Democratic Gov. Roy Cooper’s power. Now, it looks like other state Republicans have adopted the move into their playbook.

So, what exactly is happening and how will restricting voting rights impact future elections?

The state’s Republicans succeeded in the 2018 midterms in winning support for a constitutional amendment requiring voters to present an official photo ID to cast a ballot. The move was a follow-up to a 2013 voter ID law, which the Fourth Circuit Court of Appeals struck down in 2016 and called a racist voter suppression that targeted people of color “with almost surgical precision.”

Republicans, however, who lost their legislature supermajority in the election, are racing to pass the amendment before next year, when Cooper might be able to veto it.

The 141-page bill also sets out protections for the state’s voter ID law and places tight restrictions on early voting, which is historically decided by counties and typically boosts turnout among Democrats, especially in cities in 2018.

While the new bill would reduce early voting from six weeks to two weeks, previous efforts in 2014 by Wisconsin Republicans to cut early voting was ruled two years later by a federal judge to be discriminatory toward minorities and an outright effort to “suppress the reliably Democratic vote.”

The Republican-led legislature in Ohio introduced a bill last week which set out to prevent changes being made to the state constitution via statewide referendum. Citizen-led groups can force lawmakers to take action or force a statewide ballot on a proposal using petition signatures.

Under the new resolution, the percentage signature requirement has been raised from 3 to 5 percent, signatures which did not previously expire now do so after 180 days, and petitions must be submitted by April instead of July—pushing door-to-door campaign drives back into winter.

That’s because in May, Ohio voters approved a constitutional amendment which would damage the ability of legislators to gerrymander congressional districts—key to previous Republican electoral strategies in the state. Now Republican legislators are making it harder for Ohioans to organize at a grassroots level.

In Michigan, its voter registration laws are being challenged by a desperate Republican fight to sour Democratic midterm success.

In a new proposal, legislators wish to close voter registration 14 days before an election. The move directly pushes back against voter approval of a ballot initiative which sees the implementation of automatic and Election Day voter registration in overwhelming support for the expansion of voter rights.

In other parts of the new bill, Republicans want to rob incoming Democratic Secretary of State Jocelyn Benson of her office’s ability to oversee campaign finance law. Benson, who is a legal expert, described the drive as an “insult” to voters.