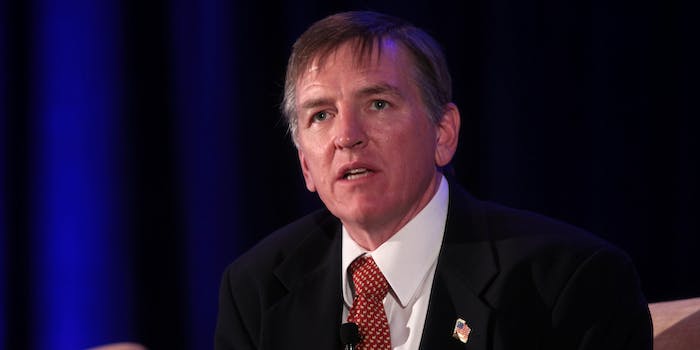 Conservatives want Dreamers attending the State of the Union arrested

The announcement follows reports that guest Dreamers will be in attendance.

An Arizona House Republican has requested that Capitol Police check the identification of all those attending President Donald Trump’s State of the Union address tonight to catch any undocumented immigrants.

Rep. Paul Gosar (R-Ariz.) announced via Twitter that he had called on both the United States Capitol Police (USCP) and Attorney General Jeff Sessions to “arrest those using fraudulent social security numbers and identification to pass through security.”

Today, Congressman Paul Gosar contacted the U.S. Capitol Police, as well as Attorney General Jeff Sessions, asking they consider checking identification of all attending the State of the Union address and arresting any illegal aliens in attendance.

Additionally, Congressman Gosar asked that they arrest those using fraudulent social security numbers and identification to pass through security.

“Of all the places where the Rule of Law needs to be enforced, it should be in the hallowed halls of Congress. Any illegal aliens attempting to go through security, under any pretext of invitation or otherwise, should be arrested and deported," said Congressman Gosar.

The request follows reports that more than 50 Democrat lawmakers have said that they plan to bring several Dreamers to the event. The Dreamers were brought into the country illegally by their parents but were granted protection from deportation under the Obama-era Deferred Action for Childhood Arrivals (DACA) program, of which there are currently around 800,000 young recipients.

At tomorrow’s State of the Union Address, I will be bringing Denea, one of California’s 220,000 DACA recipients. Denea, a UCLA alumnus, is actively involved in empowering black immigrant communities through advocacy work.https://t.co/snk9WQITku

I'm proud to announce that my guest for this year's #SOTU will be America Moreno Jimenez, a local high school teacher and Dreamer from Raleigh whose passion for giving back to her community is a testament to the story of the many Dreamers in our country. https://t.co/jzHFU92Y1m

The DACA policy, which will stop taking applications in March, protects those who have applied and received protected status. However, authorities in the Trump administration have been vigorous in going after undocumented workers, as well as people here legally. Even though Democrats will be bringing protected people, that did stop Fox News’ Todd Starnes from calling for their arrest.

The illegal aliens will be sitting in seats that in previous years were meant for brave military heroes, law-abiding taxpayers and America’s best and brightest.

The sad truth is that Democrats would rather align themselves with foreign invaders who violated our national sovereignty, thumbed their nose at the rule of law, and pillaged and plundered taxpayer-funded resources.

Immigration policy has been one of the biggest points of partisan conflict over the past year and those left of the aisle plan to use Trump’s first-ever State of the Union address to underline their opposition to recent White House plans to create a pathway to citizenship in exchange for border wall funding.

Conservative commentator Ann Coulter, however, went even further than Gosar in her comments on Monday by demanding that the Democrat members of Congress themselves be arrested and prosecuted.

“Jeff Sessions better be ready to arrest all of them for conspiring to commit a crime,” she said. “These are people who are in the country illegally and anyone conspiring with them to keep them here illegally, to invite them to a State of the Union address, Jeff Sessions should have them all arrested and I mean the congressmen.”

Despite the hype, it is unclear whether the Capital Police plan to appease Rep. Paul Gosar in his demand for checkpoints and deportations.

The Daily Dot has reached out the department for comment.