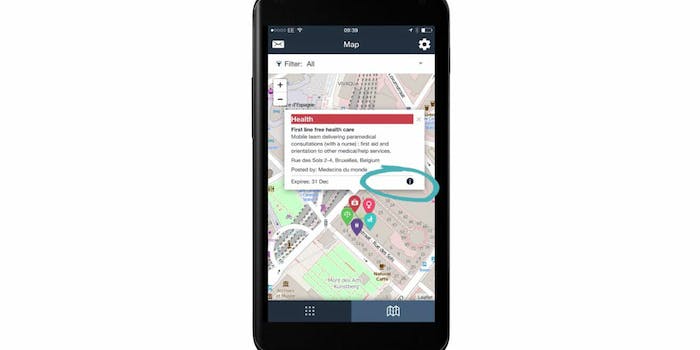 The app became available in the U.S. after Trump issued a travel ban on 6 Muslim-majority countries.

A humanitarian app used by more than 400 of the largest aid organizations in the world—including the Red Cross, Save the Children, and Doctors of the World—is helping connect refugees with important services.

RefAid, described in a report from Mashable, was created by Shelley Taylor, a former adviser to AOL, Cisco, Microsoft, and Yahoo. It uses geolocation to show migrants, refugees, and aid workers the closest places for food, shelter, healthcare, and other services. The app also has a built-in content management system that lets aid workers and refugees communicate with each other—including the British Red Cross, which uses it as a map for the services it provides throughout the country.

“I was struck, like many other people, by the refugee crisis,” Taylor told Mashable. “In Europe, it’s much more prominent. Where I am in Italy, just looking out over the sea where I am, there are people who have been drowning trying to get to Europe, to safety. And so I was impacted by the horrible images, and just felt a sense of frustration. I just thought, ‘What can we do?'”

Taylor and her team created RefAid over the course of a single weekend by adapting Trellyz, an app she had previously created to help companies manage their brands. It launched in February 2016 in the U.K. and Italy, and is now available in 14 countries: Greece, the U.K., Ireland, Italy, France, Germany, Belgium, Slovenia, Croatia, Hungary, Bulgaria, Malta, Turkey, and the U.S.

Taylor did not originally have plans to launch RefAid in the United States so early, but the executive order signed by President Trump that blocked refugees from entering the country compelled her to release the app.

“Because I’m an American, I was so upset by the Trump [travel] ban,” Taylor said. “I’m an expat living in Europe, and I’m so proud of our American history of welcoming immigrants. I thought about it all weekend, and I thought, ‘Well, we just have to do it.'”

In one day, RefAid became available in 21 cities throughout the United States.

The company is now using its knowledge to create a new app called LifeSpots, which shows those in need where they can find non-profit services. It will also show people where there are opportunities to volunteer in their community.