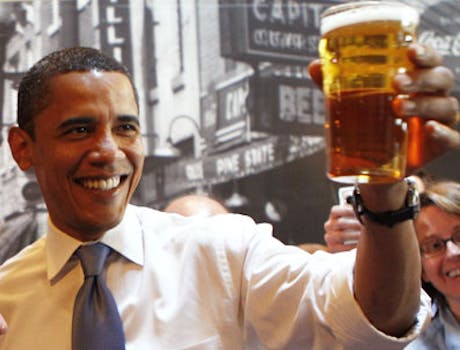 At the White House, Obama drinks home brewed ale. Reddit will have what he's having.

There are plenty of secrets President Barack Obama will never share with the with American public.

But if one Reddit user has his way, the secret behind the White House’s delicious honey ale brew will soon see the light of day.

Late Monday, redditor imatexasda, an assistant district attorney in Texas, submitted a Freedom of Information Act request to get the recipe for the White House’s beer recipe.

“The Executive Office of the President doesn’t have to respond to FOIA requests at all since they’re a specifically excepted agency. … This is just a formal way of saying pretty please that is basically guaranteed a response of SOME kind,” imatexasda wrote. “Perfect legalese would make the request no more or less likely to go anywhere.”

The FOIA follows on the heels of an official White House petition that is about 5,000 digital signatures short of its 25,000 goal. The deadline is Sept. 17.

“Following in the footsteps of great men like George Washington, Thomas Jefferson, and Benjamin Franklin, Barack Obama has reportedly been enjoying the rewards of home brewed beer. Recent reports from news outlets like the Washington Post (Aug. 15, 2012) have stated that Obama has been drinking a White House home brew Honey Ale while on the campaign trail,” reads the petition. “In keeping with the brewing traditions of the founding fathers, homebrewers across America call on the Obama Administration to release the recipe for the White House home brew so that it may be enjoyed by all.”

Neither the White House nor Obama have yet to break their silence on Twitter regarding the FOIA or petition.

Let’s hope they hop to it.