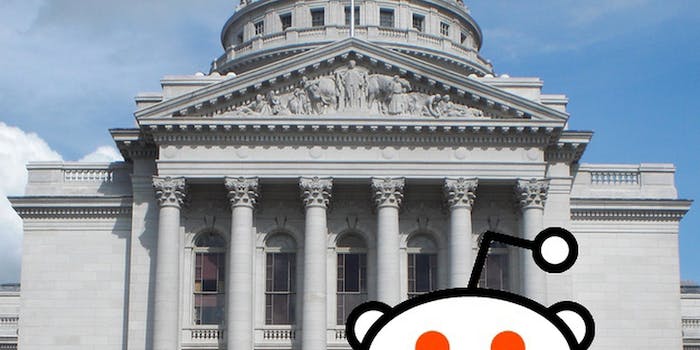 Reddit has gone completely political. Now it has its own PAC.

In the past few weeks, Reddit has given a voice to numerous aspiring members of Congress and was a major player in yesterday’s Internet protest that caused at least 18 senators to change their positions.

Now, the site is taking the next step: directly funding political causes.

A Super PAC (Political Action Committee) is a 527 organization, meaning it can raise massive funds and spend them in any way it wishes in the political arena.

Colbert’s influence was clear in the announcement thread for Test PAC, Please Ignore. “I like what you’re saying!” said cromethus. “We should have someone contact Colbert/Stewart/Comedy Central and find out exactly what it would take.”

It’s clear that Reddit and Colbert have a friendly relationship, too. In honor of yesterday’s Reddit blackout, Colbert’s show last night  featured a joke tailor-made for redditors: “You miss Reddit today?” he asked. “Here is a picture of a cat playing Xbox against Richard Dawkins, wearing Yoda ears.”

Unlike Colbert’s PAC, Test PAC can actually directly fund a federal political campaign. It has to disclose its owners, said its founder, Andy Posterick.

Otherwise, the possibilities are wide open.

It can “raise and spend money for whatever political purposes you want,” Posterick said.

Posterick said his role “is fairly simple. I sign off on expenditures, keep our money secure, file with the FEC, and do our taxes and stuff, but other than that – what you do with the PAC is up to you.”

He said creating Test PAC has been his “full-time job for three months.” He worked for Americorps until his term ended in May, he said, and has been “unemployed since then.”

For now, when the PAC has to make a decision, like where to spend its first dollar or whether to change its name, it will rely on the current Reddit upvote/downvote algothorithm.  “As of right now, voting is open to anyone with a Reddit account,” Posterick said. “As we grow, we will develop better security.”

“I will generally pick the most upvoted comment,” he said, until a better system is put in place.

Donations started coming in almost immediately. “You now have my support in the form of $25.00 a month for the next 12 months, recurring payments,” said ManHoTasTic.

Other Redditors were eager to make suggestions for how to use the PAC.

“Make ousting Lamar Smith a Priority. The person running against him is a Redditor,” one user said.