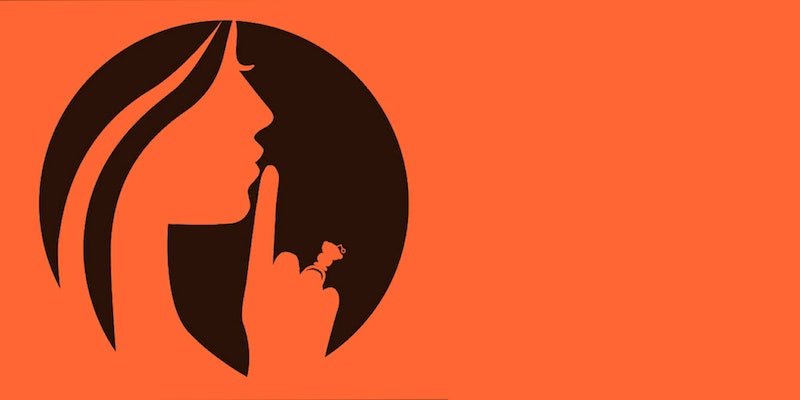 'Invites will be ignored and no new content will be generated here.'

The Reddit community devoted to discussion of the cheaters’ dating site Ashley Madison is no more. The volunteer moderator running the forum shuttered the space after it was flooded with links to personal information about Ashley Madison users leaked by hackers earlier this month.

Since the subreddit was shuttered on Monday, visitors to r/AshleyMadison are being greeted with the following message: 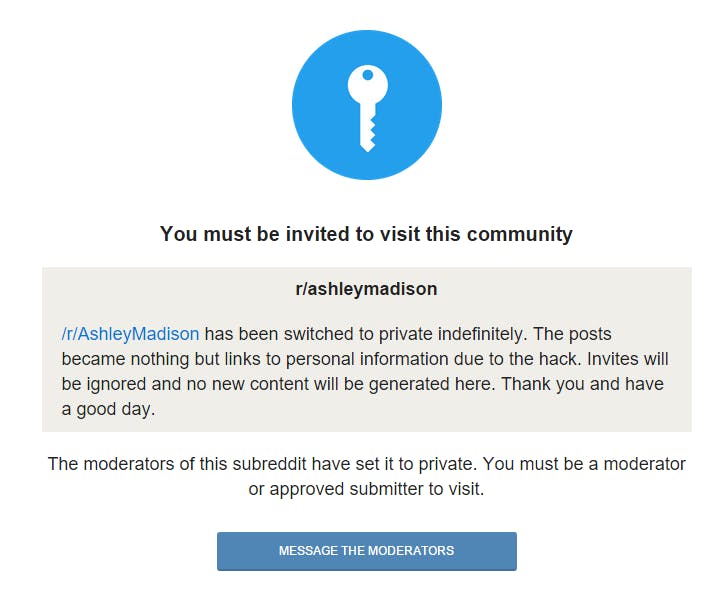 Posting someone’s personal information, a practice often called “doxing,” runs counter to both Reddit’s official content policy as well the general ethos of its community. However, after a group of hackers going by the name Impact Team leaked a massive database containing the names, email addresses, and location information of millions of users who had signed up for the explicit purpose of having an affair, the temptation proved too much for many redditors.

“After the hack, the posts were mostly news articles about the incident. After the data was released, a flood of posts giving details about persons involved (celebs) as well as sites where the data dump could be searched,” the subreddit’s moderator, a user going by the handle MalevolentCokies, told the Daily Dot. “I don’t buy into the hype that everything needs to be posted (free speech and all) so when s**t hit the fan and I finally remember to check this account, things had already gotten out of hand. I began by removing posts that were doxxing then decided to make it private.”

MalevolentCookies, who is a volunteer moderator not compensated by Reddit management, didn’t create r/AshleyMadison. It started in 2010 and essentially sat dormant for years without an active moderator. MalevolentCookies took up the mantle in 2014, with the hope of eventually doing something with the space—possibly creating a Reddit-based version of Ashley Madison where users could connect with each other.

The shuttering of r/AshleyMadison echos a similar controversy that affected the site last year. When a trove of celebrity nude pictures were leaked online, a subreddit called r/TheFappening quickly emerged as a hub for users to view the stolen images. Reddit received a considerable amount of criticism for allowing r/TheFappening to facilitate the spread of the pictures and site admins eventually banned the subreddit.

In this more recent case, no direct action from Reddit management forced r/AshleyMadison to close; that decision was made by the moderator running the community. Even so, MalevolentCookies expressed some concern about the subreddit getting banned by admins, as well as the possibility of his or her personal Reddit accounts also being banned as collateral damage.

This now-shuttered subreddit isn’t the only community on the site devoted to the ongoing Ashley Madison saga. Another subreddit, r/AshleyMadisonHack, collects news reports and posts by redditors about the hack. The rules for that subreddit, created by its moderator, make abundantly clear what isn’t allowed. 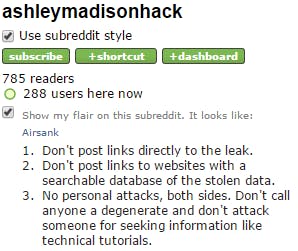 A moderator of r/AshleyMadisonHack going by the handle tonystewart told the Daily Dot that he or she recently received a message from a Reddit adminstrator about the subreddit. “They seem to be willing to keep the sub alive as long as I’m active about removing personal data and links to personal data,” tonystewart explained.