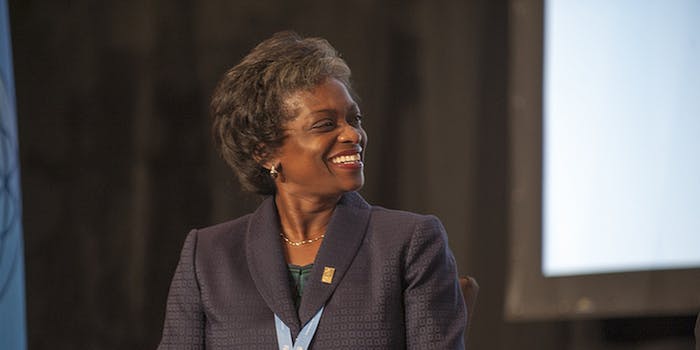 Just how much does Reddit hate the government regulatory body that has the power to preserve or kill net neutrality? Enough that when one of its most powerful members comes to chat, they won’t let her.

That’s what happened when Mignon Clyburn, one of the five commissioners of the Federal Communications Commission, came to Reddit to try an Ask Me Anything session with users. A lot of users came to the page wondering just what had happened, as anyone who looks at it would see that none of her answers were visible on her page.

That might seem curious, until you put two and two together: redditors tend to downvote people and opinions they don’t like, and Reddit treats sufficiently downvoted content as likely offensive or spam, and automatically hides it. A quick look at Clyburn’s comments reveals that every single one has been severely downvoted.

Like FCC chair Tom Wheeler, Clyburn is adamant in her support for a “free and open Internet.” But it’s not clear that Clyburn and Wheeler’s idea of what that looks like is the same that most people want. Many Internet advocates are vocal supporters of net neutrality; that means they oppose so-called paid prioritization, which allows Internet service providers to charge more to access particular sites at top speed. Many, including President Obama and the man who founded the term net neutrality, Tim Wu, say this can only be enforced if the FCC enacts so-called Title II legislation and converts the Internet to a public utility.

When pressed by one redditor, Clyburn didn’t respond to whether or not she supported Title II now, though she said she did support it back in 2010. That comment had a score of -89. Another comment—which promised that despite redditors’ concerns, the nearly 4 million net neutrality supporters who wrote to the FCC in 2014 were indeed read—was swallowed up and hidden with a score of -211.

Most glaring was a response to a user who complained of an Internet and cable monopoly in his area: “Why do I only have one option for high speed internet and television at my house?” Clyburn wrote four vague sentences, concluding, “We hope that over time, sound policies will lead to more choices.” That one has a score of -911.

“You didn’t answer the question,” one user wrote. “Pfft, politicians man….politicians,” another added.