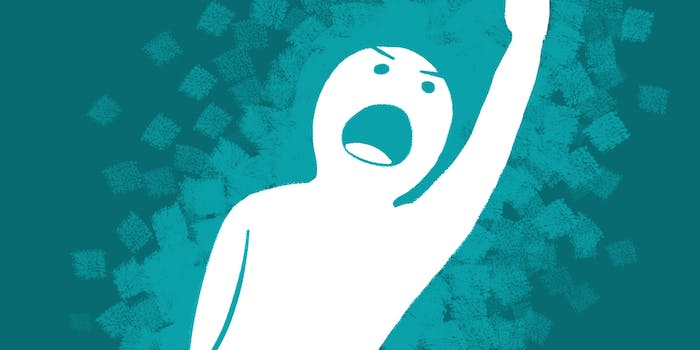 On Thursday night, social news site Reddit devolved into chaos. When the word spread that well-respected Reddit administrator Victoria Taylor, who facilitated the site’s AMA interview series, was unexpectedly fired, the volunteer moderators running the AMA subreddit abruptly shuttered the community in protest. The moderators of other subreddits joined in protest and, by Friday morning, over 1,400 subreddits had come down in solidarity.

The protest may have been sparked by Taylor’s departure, but it was only the proverbial straw that broke the camel’s back. The core issue is a sense among many moderators, especially those running some of the site’s largest and most active communities, that Reddit’s admins haven’t been sufficiently responsive to their concerns about having the necessary tools to keep their forums healthy.

Boasting over 7,000 upvotes, one of the top posts on Reddit’s front page on Friday morning sent an ominous warning to management: heed our complaints or users will leave the site en masse, like what happened when a controversial redesign triggered a mass exodus from Digg to Reddit.

One subreddit that remained active throughout the protest was r/RedditAlternatives—a forum for people to discuss other sites for Reddit users unhappy with the current state of affairs to use in its stead. Reddit user u/SobeyHarker compiled a list of some of the most promising alternatives. Here are a few of them: 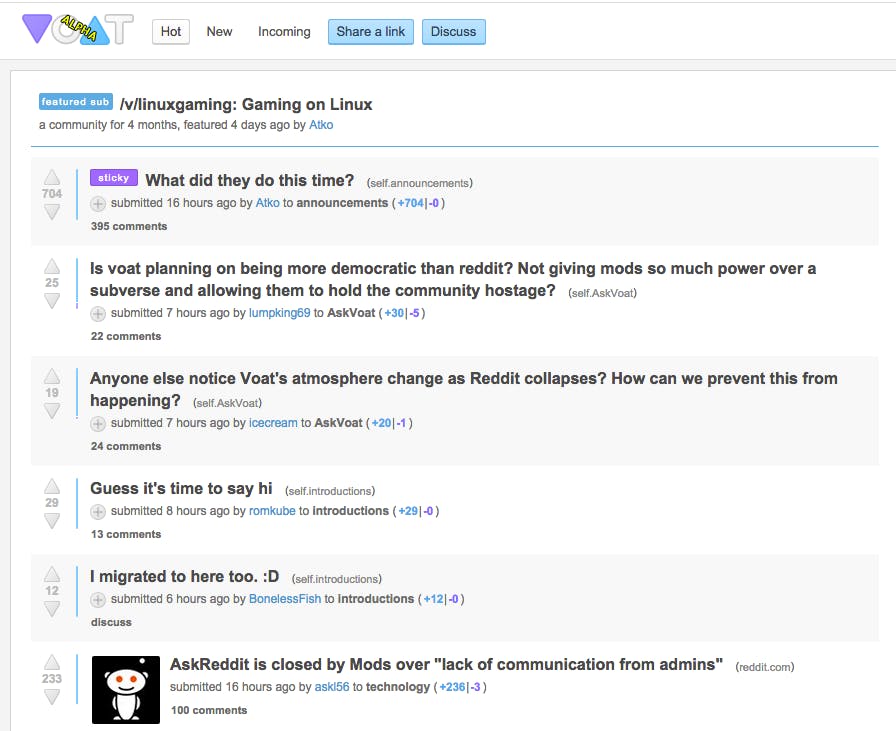 Voat is a fairly direct Reddit clone created by a pair University of Zurich students. Voat first attracted the attention of unhappy redditors earlier this year, when Reddit admins disbanded a handful of subreddits—most prominently r/FatPeopleHate—they felt were focal points for harassment of other users. Many redditors viewed the action as censorship, especially in light of users long being able to basically do whatever they wanted. Much of the conversation centered around advancing Voat as a more free speech-friendly alternative.

However, Voat soon learned that letting users do whatever they want had some downsides. The site’s servers were shut down by its hosting provider for containing right-wing hate speech and then PayPal froze the site’s account for accepting donations due to Voat violating the electronic payment processor prohibition on “sexually oriented materials or services or for items that could be considered obscene.” 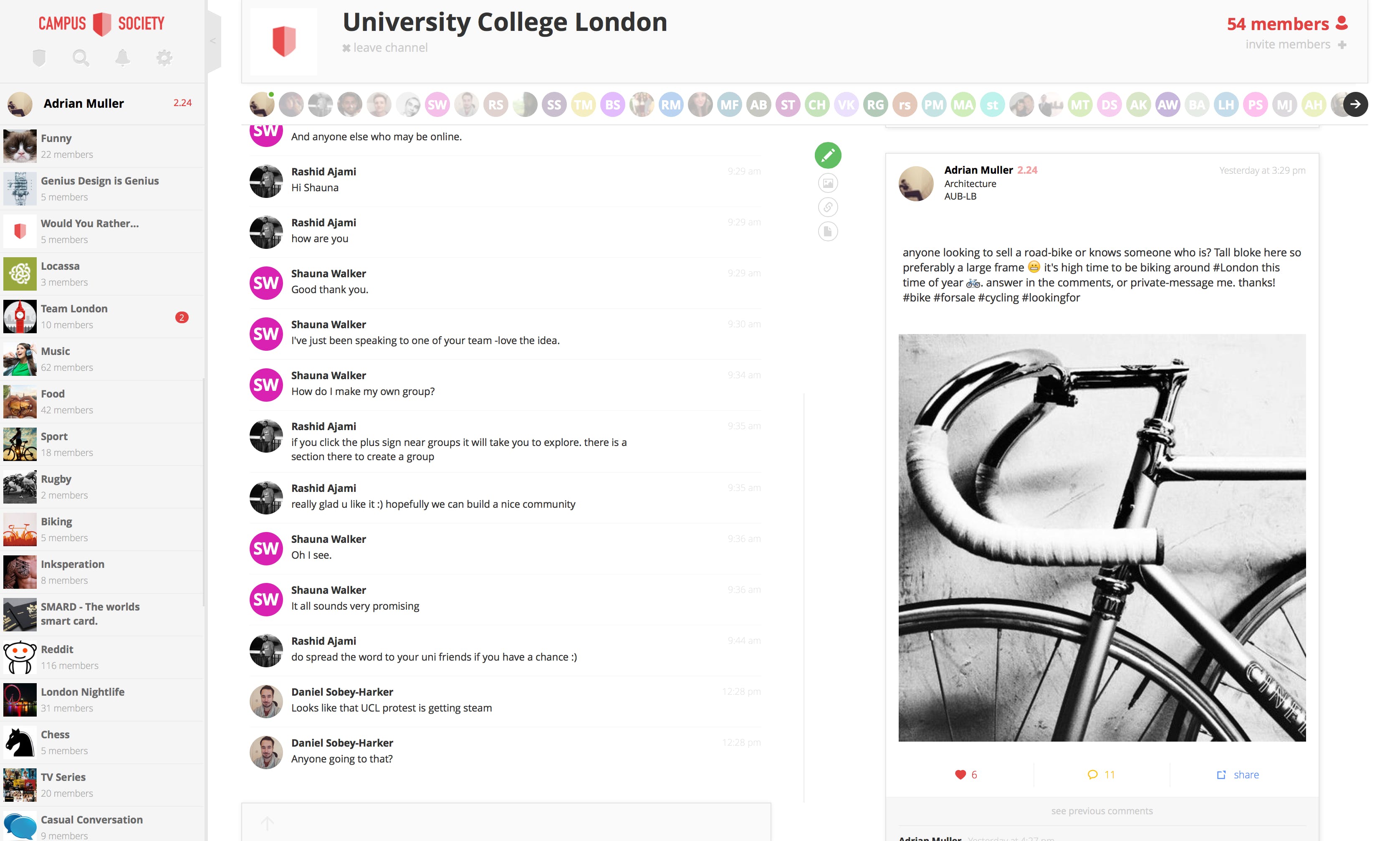 Like Facebook before it, Campus Society is a content-sharing social network that started life as a space exclusively for college students. The site only went into a live beta test a few days before Reddit began imploding, so it’s still clearly in the early stages of development. Even so, the site’s management has quickly inserted itself into Reddit’s unfolding drama. Chief Marketing Officer Daniel Sobey-Harker was the Reddit user who initially posted the list of alternatives referenced above and even had the good manners not to list his own site first. In addition, Sobey-Harker publicly offered Taylor a job on Twitter.

.@happysquid Hi Victoria, would you like to work with us? @campussociety – http://t.co/lkn8DpoLgc – how about a free trip to visit us? 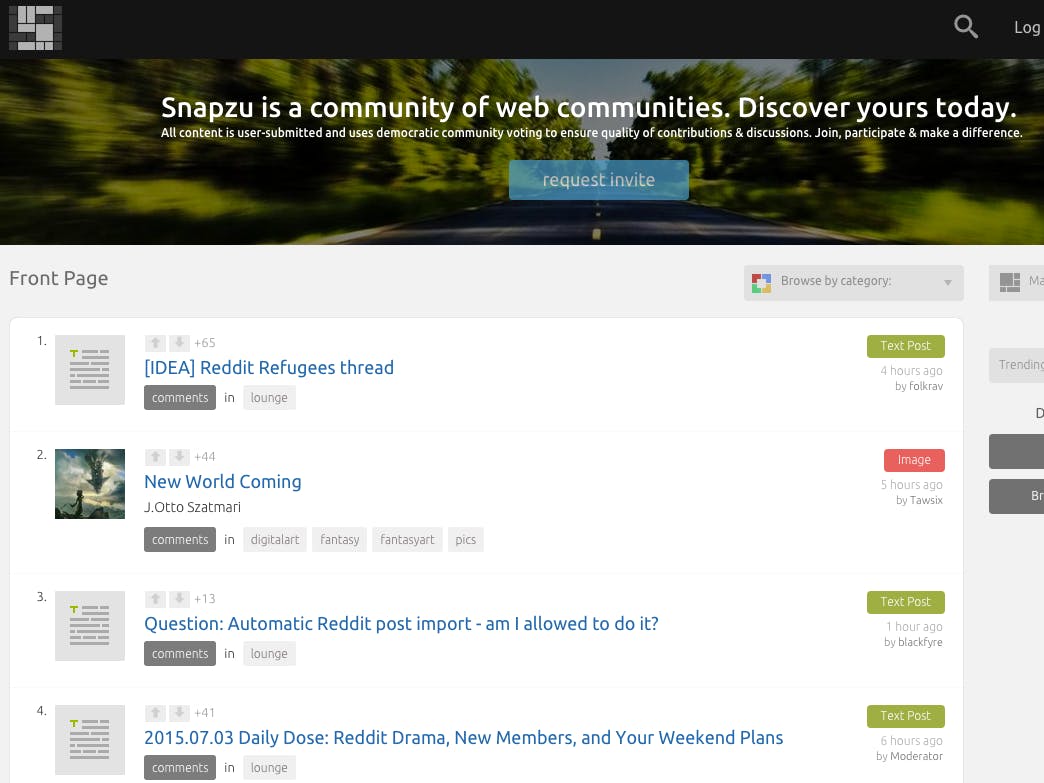 For users familiar with Reddit, Snapzu’s interface should look familiar. Like Reddit, Snapzu is organized into communities moderated by user volunteers. While the terminology is a little different—”snaps” and “tribes” instead of “posts” and “subreddits”—the functionality is more or less the same. Unlike Reddit, which lets anyone immediately sign up for an account, Snapzu requires new users to request access to an account before they’re able to post any content. Due to an influx of redditors coming over to check out Snapzu, the site has experienced intermittent outages over the past 24 hours as its servers struggle to handle the load. 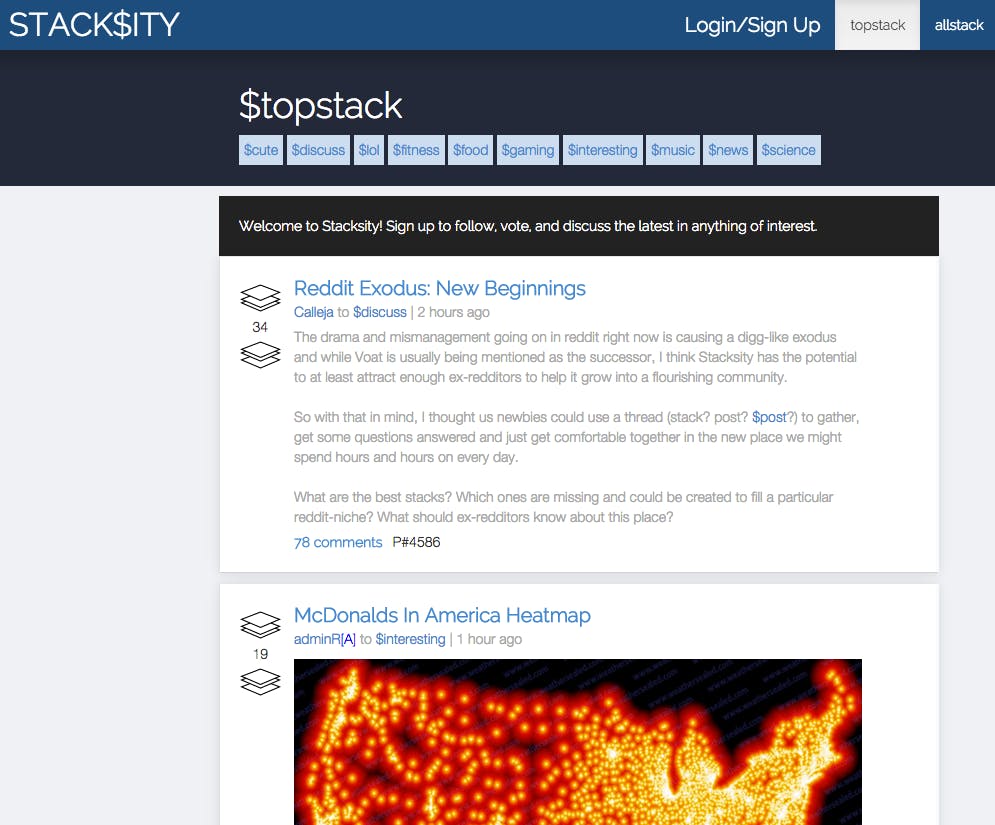 The most striking difference between Reddit and Stacksity is Stacksity’s comparative simplicity. Instead of a complex hive of interlocking, independently run communities, Stacksity appears to be more focused on giving its users a unified, cohesive experience. Posts are sorted through overall general topics like gaming or science, as opposed to the fiefdom of various subreddits. Instead of utilizing volunteers, all of the moderation on Stacksity is handled by employee administrators. “The philosophy behind this is that moderation simply depends on who gets to the Stack first, and they may drive the stack to their biases,” explain the site’s operators. “Instead admins will remove illegal content but ensure stacks are driven by user input and preference.” 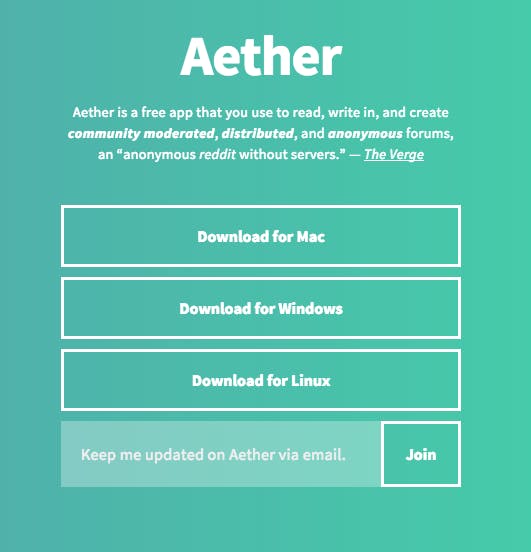 The anonymity Reddit affords its users is baked into the site’s core values. However, Aether aims to take privacy to the next level. Aether is an anonymous, encrypted network that not only allows users to employ non-unique handles, but also functions peer-to-peer without a centralized server. There is no moderation of any kind other than users upvoting content they like and downvoting content they don’t. While Aehter is built with privacy protection in mind, a disclaimer on its website reads, “Do not trust the anonymity provided by Aether just yet. Thorough security audits are needed, and found holes fixed before it can be deemed safe.” 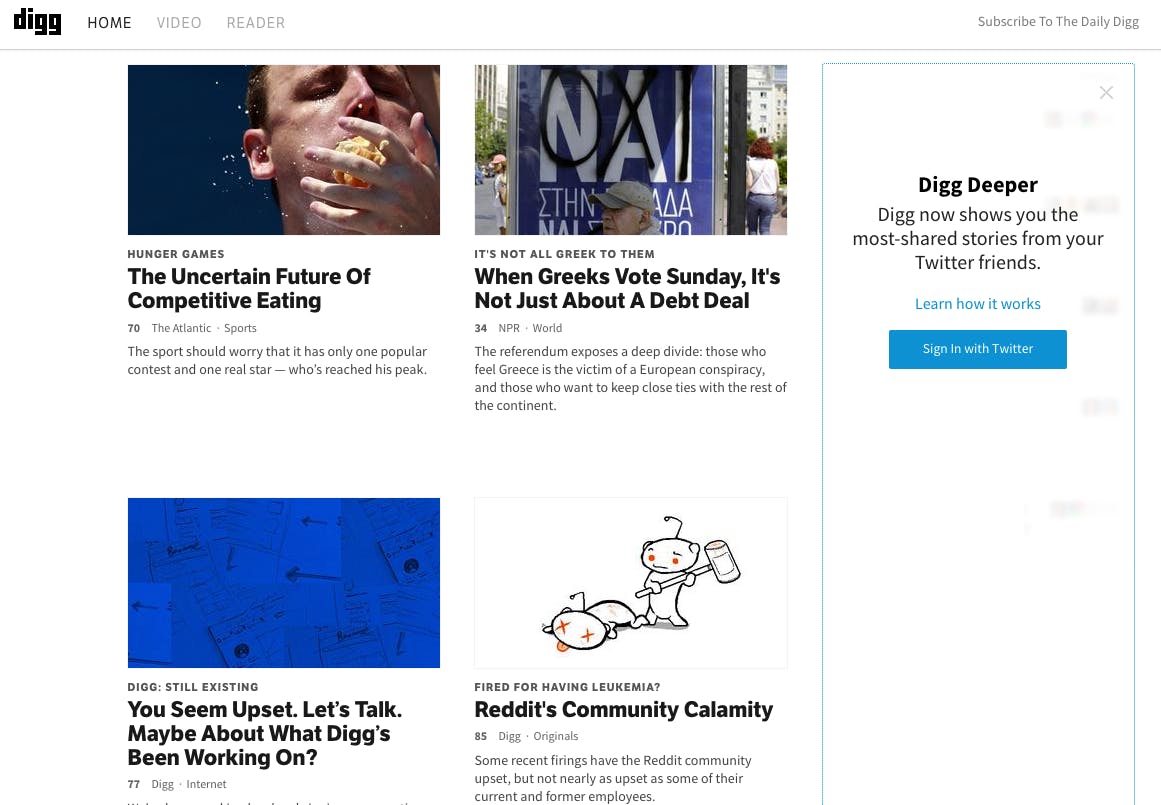 Remember Digg? Well, it’s still around and hoping to capitalize on the recent antipathy. In the early years of Web 2.0, Digg served a similar function to Reddit—a centralized hub for users to post and deliver value judgments on content from around the Internet. However, a series of ill-conceived redesigns led to the site’s army of loyal users fleeing in droves. The biggest beneficiary of the Digg exodus was Reddit. In late 2010-early 2011, Digg’s traffic cratered as Reddit’s skyrocketed. Digg never went away—Alexa still lists it as one of the top 1,000 most highly trafficked sites on the planet. A post from administrators on Friday indicates that Digg is planning on implementing a commenting feature as way to eat some of Reddit’s rapidly spoiling lunch. 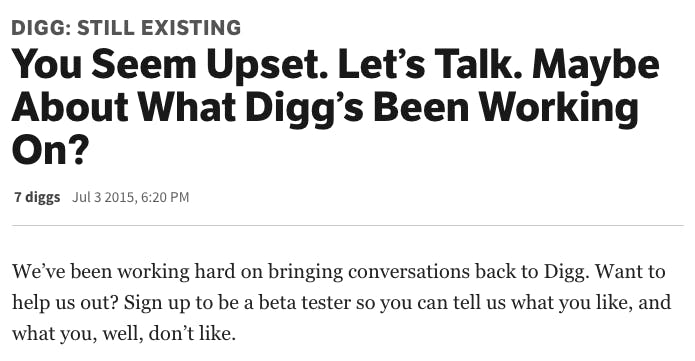 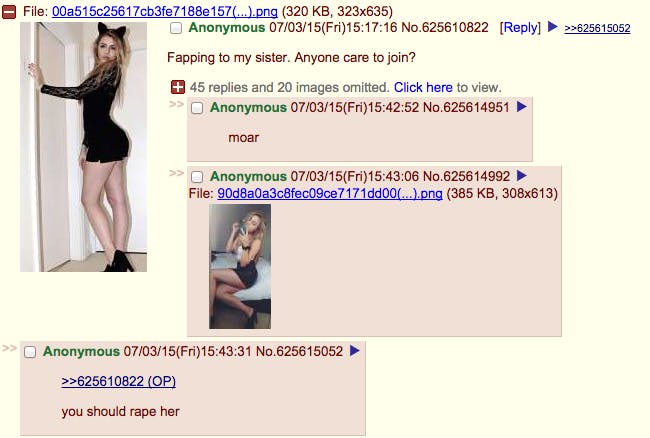