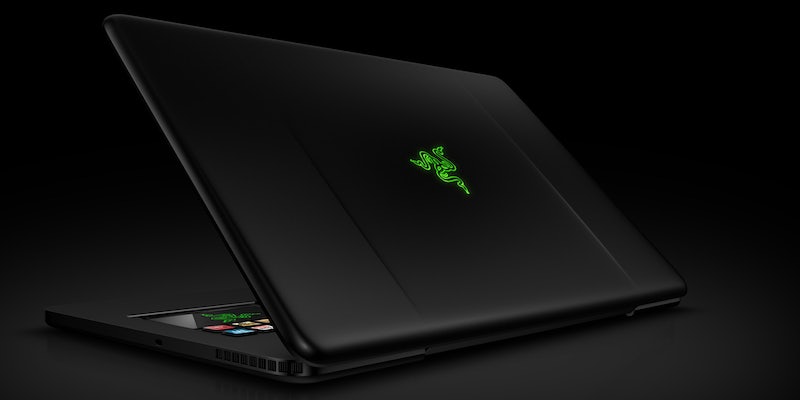 Snakes on a Train: A Razer Blade review

Testing a gaming notebook isn’t easy. Trying to come up with situations in which you’d need a mobile high-powered gaming machine isn’t particularly difficult, especially for those of us who play games daily, but determining whether or not a beastly laptop is worth its asking price is a question that varies so much from person to person that there’s no one-size-fits-all answer.

With that in mind, I’m going to tell you about my time with the Razer Blade, a ridiculously capable gaming system that carries a $2,399 price tag. I didn’t test it in my living room or take it to the coffee shop and pretend I was in a situation where it made sense to bring desktop-class gaming performance along in my backpack; I took it from Wisconsin to Texas on an Amtrak train, where it was my sole piece of gaming hardware for roughly five days. 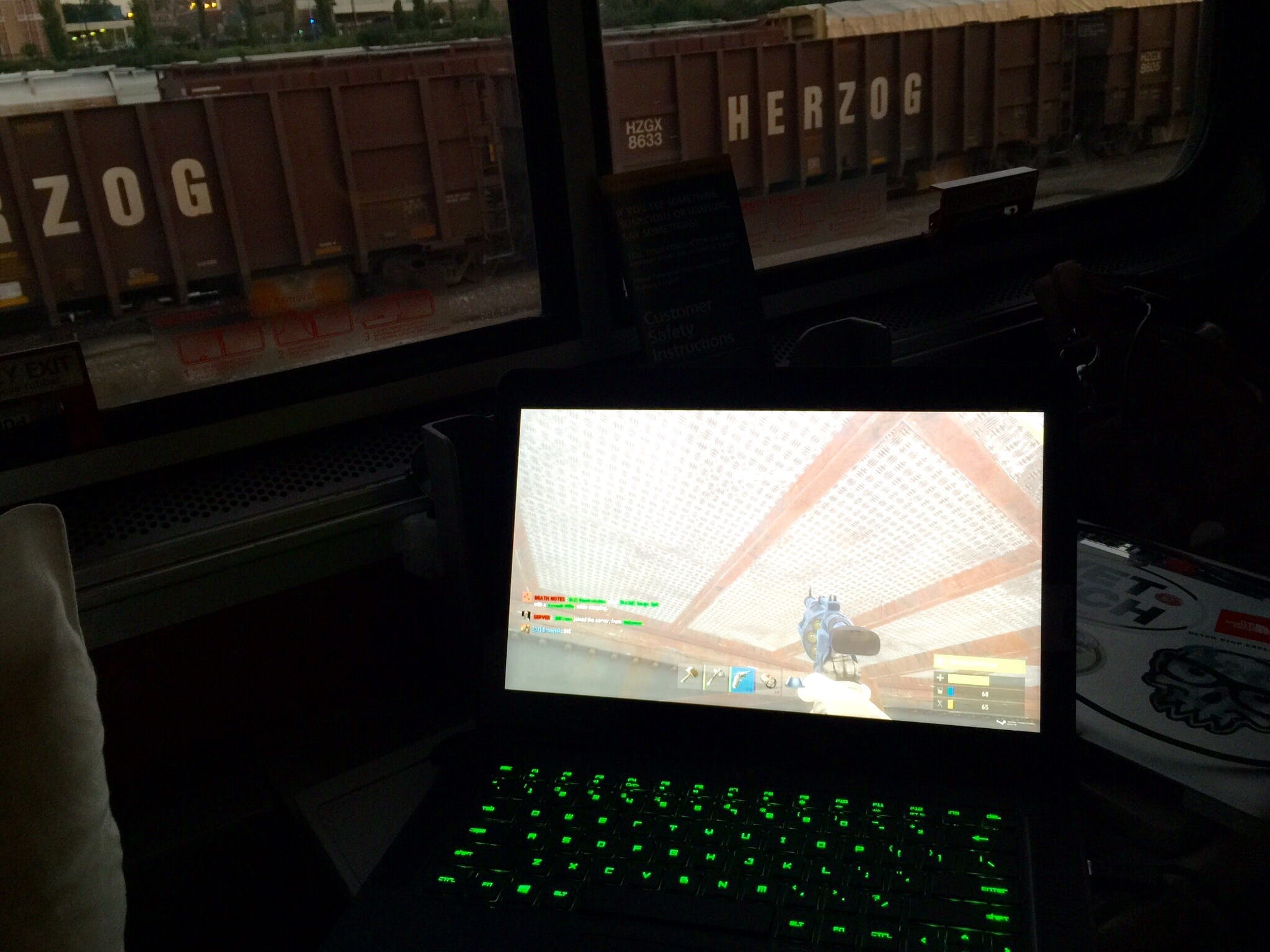 The machine I tested came with the following specs:

With a 14-inch screen and impressively thin frame, the Blade is small in stature, but never really feels like it. Carrying it felt just like carrying my 13-inch MacBook Pro, but the slightly larger screen made more of a difference than I figured it would.

Everything about the body of the Blade feels sturdy and—if you’ll forgive the term—Apple-esque. Everything is aluminum, which totally eliminates any screen wobble, and the black matte finish feels both cool and classy. You’re not going to be seen as a kid with a big, glowy, goofy gaming laptop if you’re carrying this thing around. It’s an adult machine, and it’s designed that way.

The keyboard, while not obviously not mechanical, does feature anti-ghosting, and laying your fingers on the WASD keys feels as natural as it can on a notebook. The chiclet style keys are quick and responsive, and unless you absolutely refuse to play on anything other than a fully mechanical keyboard, you shouldn’t feel hindered. 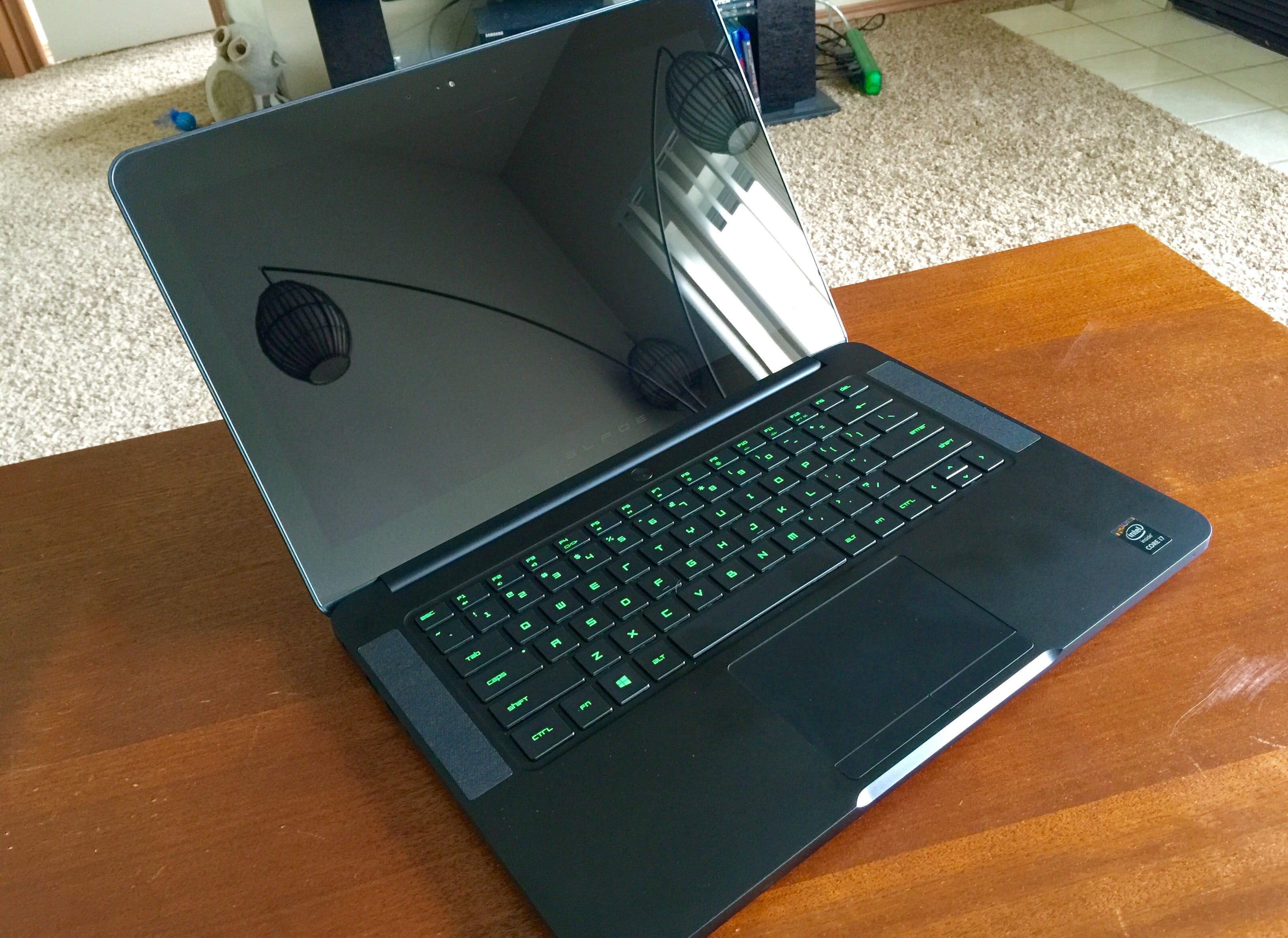 The trackpad on the other hand, while fine for basic computer tasks, isn’t meant for gaming. Razer knows this, and doesn’t try to shoehorn the trackpad—or the accurate but rarely used touchscreen—as gaming input devices. You’re going to want to bring an external mouse along for the ride.

Whether playing on the Blade in my sleeper car on the train, at a table in the lounge car, or at a desk in my hotel room, it seemed like a natural fit. It’s really the ideal size, and even though Razer also sells a 17-inch Blade Pro, there’s no way I’d bother with anything larger than the 14-inch model for portable gaming.

The display is another high point for the Blade, with a laughably high 3200 x 1800 resolution, it puts even Apple’s Retina display to shame. You’re probably not going to be playing games at that resolution, both because it’s not supported by most games and because it costs a lot more processing power, but suffice it to say that everything you do on the machine will be pleasing to the eye.

One thing I didn’t do with the machine during my testing is benchmark it. Benchmarking is great if you’re obsessed with decimal points and crazy numbers, and if you’re looking for a way to validate your purchase you can check out exactly how the Blade stacks up against the others in AnandTech’s always fantastic benchmarking tests.

When considering whether or not a device like the Blade is right for me, benchmarks are typically the least of my concerns. Since I was hands-on, I decided to just play my games as I normally do and see if it could keep up. That’s a bigger test than it might seem, as my home rig includes a heavily overclocked, water-cooled i7-2600k and two GTX 980s. 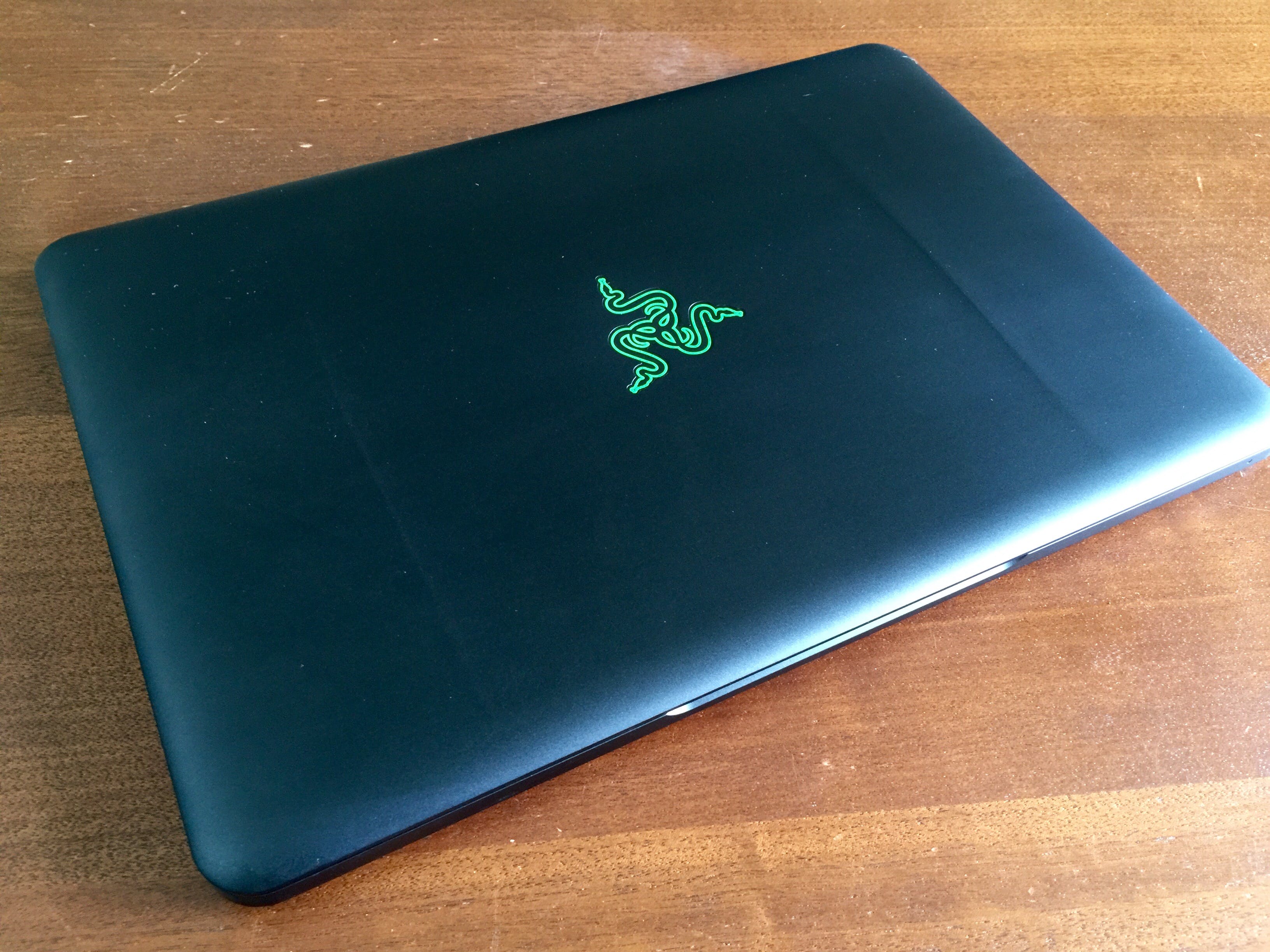 My go-to title lately has been Rust. It’s early access, which means optimization isn’t anywhere near where it should be, but it performs fairly well on my home rig and it was the first game I wanted to test on the Blade. With settings maxed, the Blade was able to keep the game at a fairly sturdy 50-60fps, which is just shy of what I’m used to. In fact, I probably wouldn’t have been able to tell the difference without an FPS monitor running.

So, there I sat, in an Amtrak lounge car speeding along a track at 75 mph, connected to my iPhone’s Wi-Fi hotspot, playing Rust. I chatted with friends on Steam, collected some resources, checked on my furnaces, and eventually raided someone else’s base. In short, I played the game exactly like I play it at home, and the fact that such a thing is even possible is a credit to the Blade.

I put several other games through the ringer during my testing days, including Trackmania 2, Counter-Strike: Global Offensive, Grand Theft Auto V, and Arma 3. As with any combination of PC parts, some games performed better on the Blade than others. It crushed Trackmania 2 and Counter-Strike easily, required a bit of fine tuning in Grand Theft Auto V, and had considerably more trouble with Arma 3 than I would have liked. Of course, my enthusiast-level desktop gaming rig also has problems with Arma 3, so I wasn’t entirely surprised with that.

Now, all of this impressive power does come at a cost. Well, several costs. First, the battery life of the Blade is nothing to brag about. If you’re chatting on Facebook it’ll last as long a six hours, but it’s all downhill from there. Its longevity is hit hardest by gaming, and since it’s a machine designed for gaming, you’ll probably be doing a lot of that. Playing a graphically intense game cuts the battery life down to an hour or so, sometimes less. Unlike with a normal notebook, you’re not going to want to leave your power adapter at home.

Heat is also a huge issue for the Blade. This machine gets extremely hot, and that’s not a huge surprise. With such powerful guts and such a slim body, there’s very room for heat to dissipate on its own, and heat builds up quite fast. Razer is quite proud of the fact that the heat generated by the hardware is localized to areas you don’t normally touch, and that’s definitely true, but if it’s sitting on your lap you’re going to have a bad time.

Also on the topic of cooling, the notebook’s fan sounds like a tiny jet taking off on your desk. It’s loud. How loud? It roars. Need an example? I was playing the Blade in my hotel room while my wife was in the bathroom with the door closed, and she could hear it “take off” as she called it. Again, if you’re playing games, you’re going to have headphones on, right? Right. It might be a non-issue for you, but others might wonder if you’re in the process of detonating a bomb.

Those practical but mostly manageable complaints aside, there’s not much to dislike about the 2015 model of the Razer Blade. Is it a computer in search of a market? Maybe. It’s more powerful and more expensive than most desktop gaming rigs I’ve seen in recent years, but it’s not a desktop rig. The Blade isn’t a computer you buy so you can play games on your couch when your desktop is in the next room—it’s a computer you buy to act as a complete stand-in for your gaming machine when playing as you normally would is not possible.

Do you need one? No, but you should definitely want one.