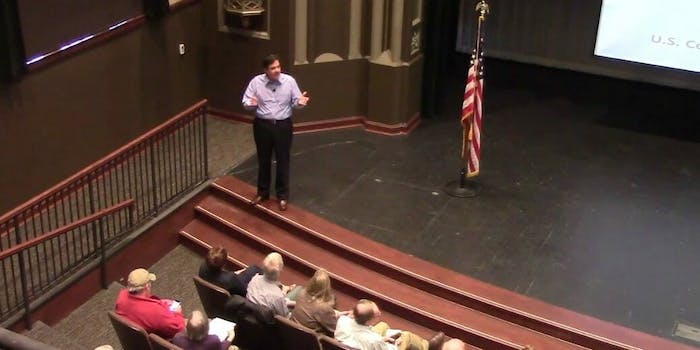 U.S. Rep. Raul Labrador (R-Idaho) is a member of the House’s Freedom Caucus, the influential far-right group that flummoxed the American Healthcare Act on its first failed attempt before eventually helping pass it on Thursday.

Labrador might have inflamed the fury of those who are incensed that the House voted to repeal Obamacare and replace it with a healthcare plan that has been panned by a number of medical groups and organizations.

On Friday, Labrador was at a town hall event in Lewiston, Idaho when he said the following: “Nobody dies because they don’t have access to healthcare.”

Here was the reaction from the crowd.

After voting yes on the AHCA on Thursday, Labrador said in a statement, “The people of Idaho know Obamacare is a disaster and want it fully repealed. Since I was first elected to Congress, I’ve been working to repeal Obamacare and that includes opposing the first version of the American Health Care Act. Over the last few months, I have been working to improve the AHCA, joining with my colleagues in the House Freedom Caucus. We have negotiated legislation that keeps our promise to the American people to lower health care costs while also protecting those with preexisting conditions.”

But it’s certainly questionable whether the AHCA will cover people with preexisting conditions, considering the bills give state governors the choice of waiving the mandate that force insurance companies to do so.

This isn’t the first time Labrador has incensed some of his supporters with his view on healthcare. Last month, he was booed at a town hall for saying he doesn’t believe healthcare is a basic human right.

As for Labrador’s claim on Friday, the Idaho Statesman cited a study from the nonpartisan Kaiser Family Foundation which said, “Because people without health coverage are less likely than those with insurance to have regular outpatient care, they are more likely to be hospitalized for avoidable health problems and to experience declines in their overall health. When they are hospitalized, uninsured people receive fewer diagnostic and therapeutic services and also have higher mortality rates than those with insurance.”