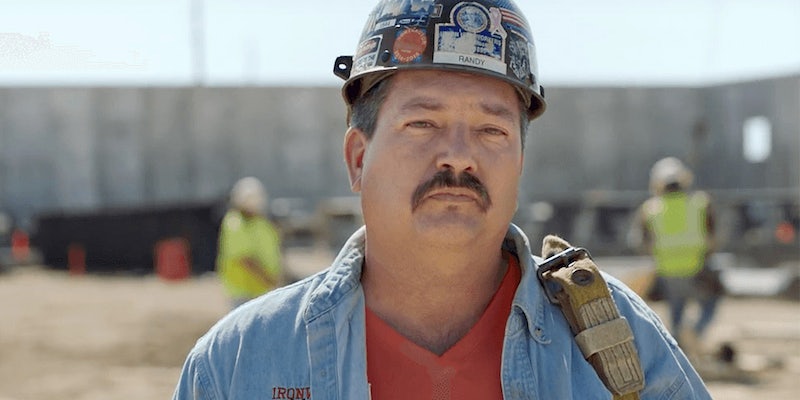 He's more progressive than most.

Randy “Ironstache” Bryce is one of the few Democratic candidates that the entire party seems to like. The Randy Bryce campaign has passed pretty much any leftwing litmus test there is: Bryce supports abolishing ICE, he is in favor of Medicare for All, and he would like to see a number of robust financial regulations.

At the same time, more pragmatic, centrist Democrats see in Bryce a candidate with strong union backing with a great story (he is himself a union ironworker). In short, in Ironstache, progressives see a champion and centrists see a winner.

If Randy Bryce wins in November and takes Paul Ryan’s old seat in Wisconsin’s first district, it will dispel the conventional wisdom that bold, progressive policy ideas can’t win in America’s heartland. An Ironstache victory could change the face of politics in the Midwest.

At the very top of his Healthcare policy page, Bryce makes his policy clear: “Pass Medicare for All.”

While a number of incumbent Democrats and moderate hopefuls have now said that they support “universal healthcare,” that is theoretical. Universal healthcare is a concept, not a policy proposal. Medicare for All, by contrast, is putting your money where your mouth is. Bryce was an early champion of Medicare for All, and we can expect that he will push hard for the legislation if he earns a seat in Congress.

Ironstache’s other healthcare priorities read like a laundry list of progressive positions tailored to his midwestern audience. He wants lower drug prices and to fund programs to fight opioid addiction. Plus, he has made paid medical and family leave a priority.

Healthcare is a personal issue for Bryce. He is a cancer survivor (thanks to close proximity to toxic chemicals during his military service). Randy Bryce’s mother suffers from multiple sclerosis. He has used his personal healthcare stories to campaign doggedly for Medicare for All and changes in prescription drug pricing.

The litmus test for a truly progressive immigration policy has become calling to abolish ICE. Once again, Rany Bryce passes this test with flying colors.

He states, “ICE should be abolished, and Congress should explore which existing agency could best house immigration and customs enforcement so that only those who pose a true threat to our country’s security face deportation.”

Bryce also opposes the travel ban, does not want the police assisting ICE, and supports DACA.

Criminal justice is a large part of the Randy Bryce campaign. For a candidate who is not running in a major city, that’s a bit surprising.

His proposed reforms to the justice system read like they were put forth by a group like Black Lives Matter or Democratic Socialists of America (DSA). They include ending private prisons, ending mandatory minimum sentencing, ending discrimination against ex-convicts in job interviews, ending the school to prison pipeline, increasing police accountability, restoring voting rights for felons, and legalizing marijuana.

In his economic proposals, Randy Bryce’s working-class background really shows through. Many of his positions regarding jobs and worker’s rights show a concern for lower-income communities that few politicians can claim.

He supports legislation around ending wage theft, providing employees with reliable schedules, preserving pensions, and increasing the minimum wage to $15 an hour (the current minimum wage in Wisconsin is $7.25 an hour). Bryce also wants to pass a bill that would allow domestic workers to organize.

Bryce is of the Bernie Sanders school of thought that big picture financial realities come down to a class war. He wants to pass financial transactions tax aimed at reducing risky behavior on Wall Street and expand social security. Bryce also supports “fair trade,” aimed at protecting manufacturing jobs in America. He has said that his feelings on trade are informed by working with inferior Chinese steel on the job.

Not only is Ironstache a union member by trade—he has dedicated time and energy to defending the union cause. He was heavily active in organizing against governor Scott Walker’s numerous attacks on collective bargaining.

Unlike some middle America Democrats, Randy Bryce is unequivocally pro-choice. His website states, “Randy also opposes any legislation that limits the right of a woman to make the best decision for her health, including laws banning abortion at twenty or fewer weeks and requiring parental consent for minors.”

In addition to his uncompromising pro-choice stance, Bryce is in favor of a number of progressive policies for women. He is an advocate for equal pay and wants sexual harassment and abuse legislation inspired by #MeToo. Bryce believes in protecting victims of domestic violence.

He is also one of the rare candidates to explicitly advocate for trans women in his policies around women’s health and domestic violence.

When it comes to the environment, Bryce has a far more comprehensive and ambitious plan than most politicians.

He wants to fund a “Green New Deal,” which would invest a large amount of money into creating eco-friendly jobs. Several other environmental commitments that he advocates for include 100 percent renewable energy by 2035 and ending subsidies for fossil fuel companies. Bryce also opposes the construction of any new pipelines and advocates for additional preservation of wetlands and protected areas around the Great Lakes.

There has been a tension in Bryce’s political life between siding with the building trades when union-backed construction jobs come to Wisconsin and aggressively protecting the environment, but in recent years he has swung towards a more eco-conscious set of positions.

Unlike some other prominent Democratic candidate like Beto O’Rourke in Texas, Bryce is also uncompromising when it comes to gun laws. He advocates for a semi-automatic weapons ban that would include “assault weapons, bump stocks, and military-style weapons and accessories.”

Coming for a candidate in America’s heartland, it’s a testament to how far the left has come.