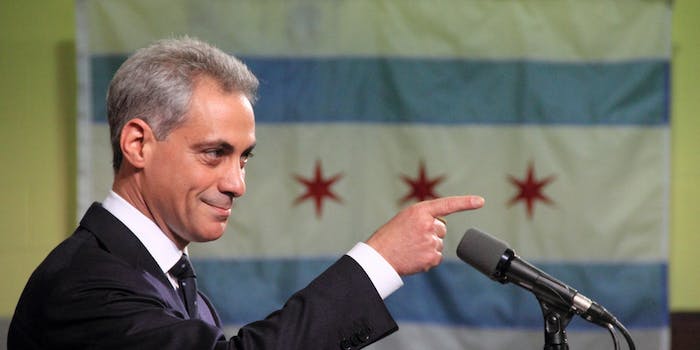 Chicago Mayor Rahm Emanuel has a $100,000 reason to support the Comcast-TWC merger

An International Business Times investigation into public records reveals that Emanuel’s election campaigns have directly and indirectly received over $100,000 from Comcast in the past decade.

As Emanuel campaigned to win and then keep his seat as the congressman from Illinois’ 5th district, Comcast gave him $46,000 toward his election. In addition, during the two years in which Emanuel was the chairman of the Democratic Congressional Campaign Committee, from 2005 to 2007, Comcast employees donated another $25,000 to the DCCC.

When he ran for mayor three years ago, Emanuel received $5,000 from Comcast executive vice president David Cohen, who has been at the forefront of Comcast’s push for its merger. Cohen gave an additional $10,000 to a political advocacy group allied with Emanuel that has lobbied for the mayor’s programs since he took office in May 2011.

Emanuel wrote a letter to the Federal Communications Commission (FCC) in August “to provide the City of Chicago’s perspective” on the merger. “We are optimistic,” he wrote, “that the increased resources of the combined corporation will lead to more investment in local network infrastructure and faster Internet speeds.”

According to International Business Times, “records from the Illinois State Board of Elections show Emanuel’s mayoral campaign and his other municipal political organizations have received $50,000 from Comcast employees since he began running for mayor in 2010.”

Emanuel’s office did not immediately respond to our request for comment.

Emanuel is certainly not the first mayor to come out in favor of the deal. Last week, The Daily Dot reported on 52 mayors of cities large and small who signed a letter to the FCC, urging the Commission to approve Comcast and Time Warner’s request to merge. Emanuel did not sign that letter, however.

In a statement to International Business Times, Comcast said it is “honored” by the support its received from Emanuel and other officials:

“We are proudly committed to our local communities and work closely with them. We are honored to have the support of Mayor Emanuel as well as numerous community and education groups across the country — many of them as their letters state work directly with us to implement Internet Essentials — the success of which would not be possible without the partnership and support from local leaders, educators, and community and non-profit partners. We have a long history of working with local officials and community groups to improve the areas where our customers and our employees live and work.”

The proposed merger, which the two companies announced in February, needs approval from the FCC and the Department of Justice’s Antitrust Division before it can proceed. The Justice Department announced that it had begun reviewing the merger on March 6, while FCC began its review on April 8. The Judiciary Committees in both houses of Congress held hearings in the spring, although Congress does not have any authority over the matter.

Opponents of the deal are worried about its effects on competition, especially in areas where Comcast and Time Warner, the two largest cable providers in the U.S., are the only two broadband providers. The merger would effectively eliminate any competitive concerns motivating each company in their respective markets. Conversely, the companies have said that their merger would not aversely affect competition because their current markets do not overlap.

Cable industry watchers advocating against the merger are also concerned that FCC Chairman Tom Wheeler, who is overseeing his Commission’s review, was previously the head of the National Cable Television Association, the largest cable TV industry trade association.

Emanuel told the FCC that “Comcast has been a good partner with us in addressing [Internet access] challenges in the past.” Indeed, the mayor touted his partnership with Comcast in May 2011 when the company brought its low-cost Internet Essentials program to the city.

Comcast launched the Internet Essentials in order to smooth over concerns about its January 2011 acquisition of NBC Universal, and, as Adi Robertson wrote on The Verge, the Comcast-Time Warner merger “is arguably the reason that Internet Essentials is still around at all.”

In his letter to the FCC, Emanuel observed that “Comcast currently makes considerable contributions in Chicago.” Based on his mayoral campaign’s donation records, that much, at least, appears to be true.