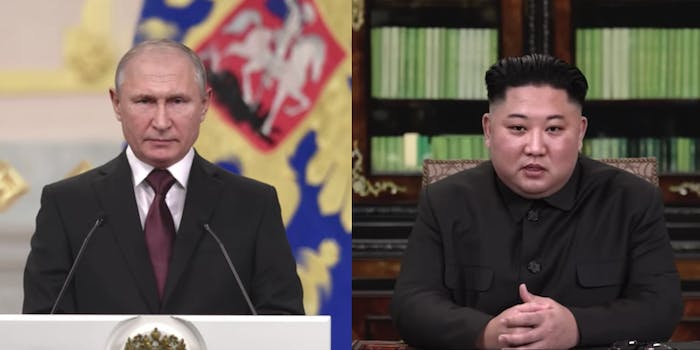 The ads were set to appear on TV too but were ultimately pulled by networks.

The videos, released this week by RepresentUS, a non-profit and non-partisan group focused on political corruption, assert that the greatest threat to democracy is not foreign interference but instead voter suppression.

In the advertisement featuring the North Korean leader, viewers are warned that “if the election fails, there is no democracy.”

“I don’t have to do anything. You’re doing it to yourselves,” the fake Kim Jong Un says. “The people are divided. Your voting districts are manipulated. Voting locations are closing so millions cant vote.”

“America, you blame me for interfering with your democracy, but I don’t have to,” the Putin character says. “You are doing it to yourselves. Polling stations are closing. You dont know who to trust. You are divided, There are strings we can pull, but we dont have to. You are pulling them for us.”

“This footage is not real, but the threat is,” a disclaimer at the end of both videos states. “Join us.”

Both videos include links to six steps viewers can take to help ensure the integrity of the 2020 presidential election.

“We created this ‘deepfake’ ad to show just how dangerous the attacks on American democracy are,” RepresentUS says. “The video was faked, but the message is real: If our election fails, our democracy will fail.”

The advertisements were intended to air in the Washington, D.C. area on numerous channels but were reportedly canceled by the networks on Tuesday.

YouTube also rejected the organization’s request to run the videos as paid advertisements due to their policies surrounding manipulated media.

Henry Ajder, a leading expert on deepfakes and synthetic media, told the Daily Dot that pulling the advertisements may have been the right call.

“It’s obvious the campaign isn’t meant to be deceptive, but it’s clearly meant to be controversial and attention-grabbing with figures Trump has cozied up with,” Ajder said. “I guess the networks who pulled it last minute felt it was a bit too hot and given the nature of the debate, having deepfakes hit an audience unfamiliar with them perhaps was the right call.”

Either way, the videos appear to be having some impact. The campaign has been promoted by numerous celebrities including comedian Amy Schumer and renowned songwriter Sia.