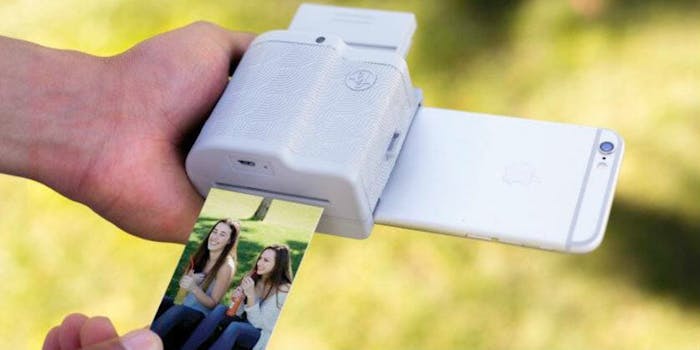 The device captures a six-second clip every time you take a still image.

A Kickstarter startup is using augmented reality—considered by some to be the future of technology—to reinvent a pastime that has all but died away.

Prynt recently unveiled the Prynt Pocket, a new version of its Polaroid-like instant mobile printer. The Prynt uses an adapter to connect directly to your smartphone, which goes in a slot on the side of the device. It can then print any photo from your phone in a matter of seconds on a mini Zink photo paper strip, which uses ink-less thermal printing technology.

That sounds pretty impressive, but it isn’t anything that hasn’t been done before. What’s unique is that each of the tiny photos contains a hidden video clip waiting to get out. When you take a photo, the Prynt records a six-second video clip from your smartphone. That video clip gets saved up in the cloud and attaches itself to the photo you just took.

Here is where it gets interesting—every time you open up the app and scan the still image, the six-second video clip associated with it will play on your device, and be overlaid on top of the printed photo you are pointing your phone at. In a way, it’s like printing a photo that turns into a GIF every time a smartphone lens gets pointed at it.

Here is how it looks. Note, the video will not be projected onto the image; it plays on your smartphone screen:

You do want to be careful about the contents of your clip. Once the video is associated with a photo, anyone can scan the print and view the clip. The owner of the photo will be notified every time that happens.

The Prynt Pocket is a neat way of blending a dying art with an emerging technology, and Fitz Tepper at TechCrunch says he came away “really impressed” by it (though printing quality was only OK).

The Prynt Pocket retails at $150, and is available now.