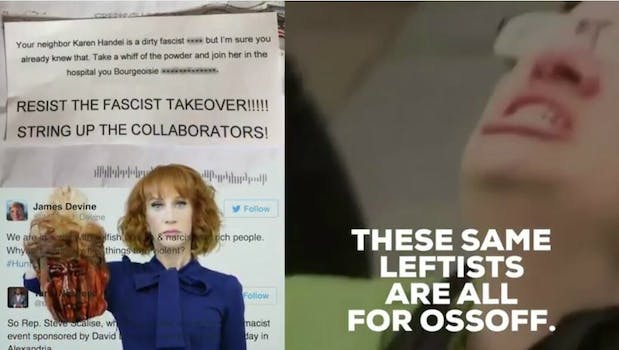 With Republicans worried about possibly losing the Georgia Sixth Congressional district to 30-year-old Democrat Jon Ossoff, one right-wing group is trying to tie him together with last week’s horrific shooting of GOP Rep. Steve Scalise.

In an ad released Sunday, titled “Stop The Violent Left,” Principled PAC shows video footage of the aftermath of the Scalise shooting and Kathy Griffin holding the head of Donald Trump while describing the “unhinged left” as “endorsing and applauding shooting Republicans.”

According to Mediaite, the commercial is part of a small five-figure ad buy, and it will run on Fox News on Sunday and Monday.

As for how fringe Principled PAC might be, right-wing commentator Laura Ingraham had this to say on Twitter two months ago.

PAC TROLLS: Tell everyone NOT to give a DIME to the PrincipledPAC run by some guy named Reilly O'Neal, supposedly for my "Senate run"

The latest poll numbers for the race between Ossoff and Republican Karen Handel is too close to call (though Ossoff appears to be leading slightly in most predictions).